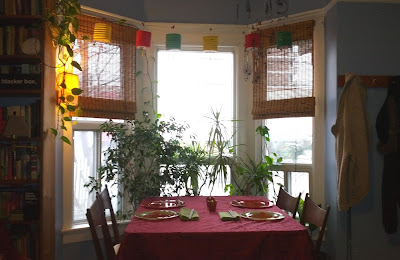 Back at the beginning of January I enthusiastically signed up for a number of food, canning and reading challenges. You know, that new year, new outlook feeling, full of the promise of all the things you'll accomplish this year. Four weeks later I'm scrambling to get this post in under the wire. This is my first entry for the CHC Canada 150 Food Blog Challenge 2017.  The topic for January is fish and seafood.

I also signed up for Food In Jars Mastery Challenge, however, the deadline for this month came and went and I never did get around to making marmalade. I bought the ingredients to do a couple different recipes but since I'm not really a marmalade fan I ended up eating the grapefruit, drinking the whiskey, and freezing the strawberries. Maybe next month!

CHC's challenge is intriguing because it's in honour of Canada's 150th anniversary of Confederation and the recipes are supposed to reflect aspects of Canadian history and culture.  The suggested topics are:
I decided to do a take on the cultural diversity that makes up Canada today. One of the things I love best about living in Toronto is the abundance of cultures from around the world, and the opportunity to partake in food and celebrations that were not part of my experience growing up in small town Canada. As a child, the only holiday celebration I knew of other than traditional Christian-based was Hanukkah. Chinese food when I was young meant chop suey and sweet and sour chicken balls. My best friend in kindergarten was from Jamaica but the most exotic thing her mother served us was peanut butter and banana sandwiches (my mom only put strawberry jam on ours). I moved to Toronto in 1990 and my exposure to new food and cultural activities was blown right open! Since then I've enjoyed eating new foods, participating in celebrations and learning about as many cultures as I can. Canada is a country of immigrants, and the ability to embrace the ideas and cultures and foods that come from many other places is what made Canada what it is today!  Lunar New Year which is celebrated by many Asian cultures is one of my favourite adopted holidays and for many years I've been hosting a New Year dinner on the first new moon that falls between 21 January and 20 February. This year it occurred Sat Jan 28 and ushered in the Year of the Rooster!

Many of the foods associated with the Chinese New Year are symbolic for good fortune. Things like dumplings and tangerines are served because they resemble coins, to bring financial luck. Another traditional dish is Longevity Noodles - long noodles are supposed to encourage a long life. The main showpiece dishes are usually chicken and fish, served whole. The character for prosperity, yu, is a homophone for the word for fish, and a whole steamed fish, eyeballs and all, symbolizes abundance and unity.

Steamed Whole Bass in Black Bean Sauce is delicious, and a simple yet impressive dish to make (as long as you don't mind eyeballs staring at you from the plate!) I found sea bass at my local fish market and picked out one that looked very fresh and a perfect size. The young man working the counter took it to be cleaned and gutted and asked it I wanted the head and tail removed. Without thinking I responded, "No thank you, it's for new year". He looked up, his clearly Asian face seeing my clearly not; he grinned and said "Okay, just the fins then."

Wash fish in cold water and pat dry. Make 2-3 diagonal incisions from stomach to backbone on both sides of the fish. Rub with salt & pepper and set aside.
In a small bowl add scallions and ginger, black bean sauce, cooking wine and oil. Mix til blended. Coat fish on one side only, and insert about 1 tbsp in the cavity. Place fish on a heat resistant plate, sauce side up.
Add 1-2 inches of water to a wok or roasting pan. Place a rack in the bottom of the pan and bring water to a boil. Place the plate with fish on the rack making sure it's above the level of the water. Cover with a lid or aluminum foil and cook at full steam for 10 minutes. I have also done it by bringing the water to a boil on the stove, adding the fish as above and placing the entire pan in the oven at 325 F for 15 minutes. Check to see if fish is done by inserting a fork to see if it flakes easily. 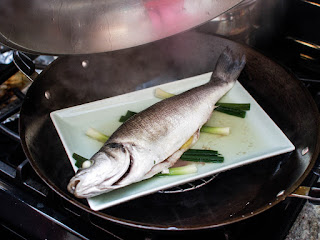 I don't own a wok so I used a large roasting pan that easily fit a canning rack. This photo borrowed from Serious Eats shows steamed fish done in a wok, either method works fine.

I also was so busy getting ready for the dinner, which included multiple dishes in addition to the fish, I neglected to take any photos of the food and only one of the decor as I was preparing.  So enjoy this lovely graphic, also borrowed from the internet, and Happy Year of the Rooster! 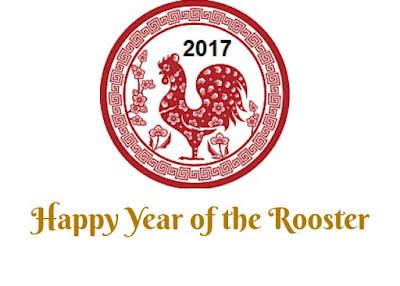