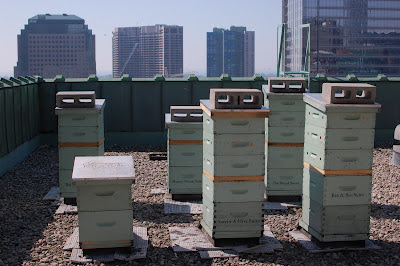 One of the perks of my position with FoodShare is our partnership with the Toronto Beekeepers Co-op; in addition to the delicious honey that we share, the co-op permits a Foodshare employee to become a member and this year I got to be it! Because of my crazy schedule I have only been to meetings up till now but on Monday I donned my lovely new beekeeper suit and was part of the team which harvested the first of this season's honey from the hives on the roof of the Royal York Hotel! 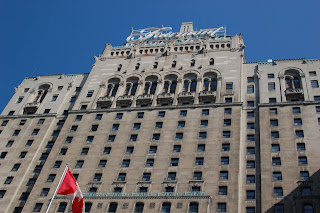 Hard to believe that this building in the heart of downtown Toronto is home to honey bees but there are 5 hives installed as part of the rooftop gardens. 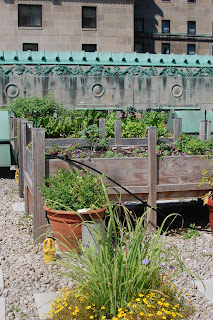 The rooftop gardens supply much of the pollen for the bees but they can fly up to 3 kilometers for other sources of food. 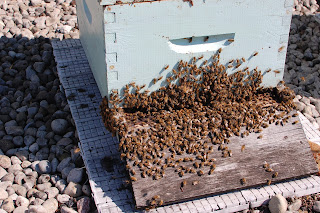 The bees are milling around the bottom of the hive because we have temporarily separated the top boxes ( called supers) from the lower ones to make harvesting easier. 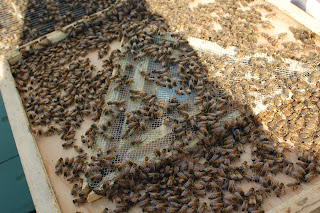 We use a maze which allows the bees to enter the lower supers from above but they can't find their way back up
. 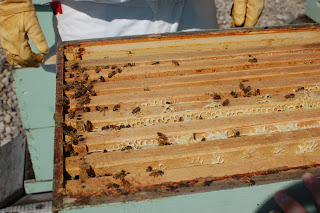 Each super contains a number of frames in which the bees build honeycombs of wax and fill with them with honey. The frames are removable. 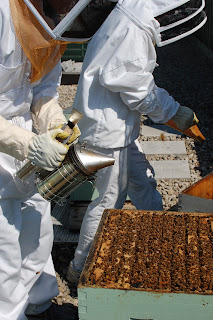 We use small amounts of smoke to subdue the bees temporarily. 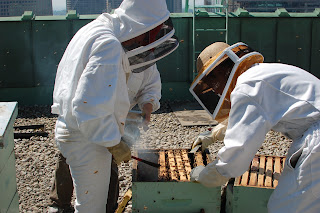 We remove the frames to see the state of honey production. 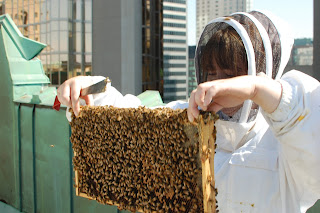 The bees will cling to the frames to try to protect the honey - we flick them off with a soft brush. 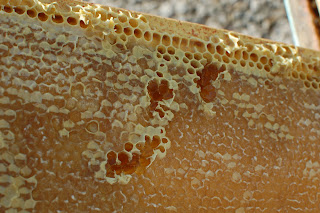 Finished honey is capped with a coating of wax. We only remove a frame if  50% or more of the honey is capped. Uncapped honey isn't ready- it lacks the correct sugar density and will ferment quickly.

Here I am in my beesuit- I look like an oompa- loompa! 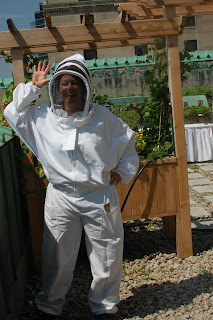 Next up - extracting the delicious honey from the combs! 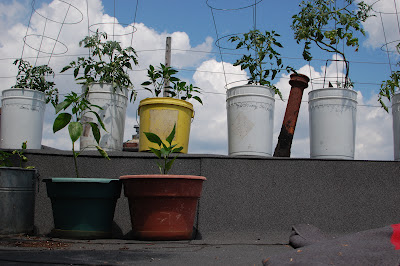 So the month of June vanished in a blur as usual. Those of you who've known me for while now know that I work for Pride Toronto every year, as the technical director of all the live music stages. This year we had 8 stages in total and featured such artists as Bif Naked and Corey Hart (who I got to drive around in my golf cart- the 15 year old in me is still giddy!). The amount of phone calls emails and paperwork generated by festival of this size is astronomical so understandably many things in my life get put on hold for the month of June.  Things like blogging, gardening, eating properly, and during the festival even sleep becomes a luxury.  The festival itself went very well, no major disasters, and a good time was had by all. It's taken me a full week to recover however and I'm still prone to random naps.

I did manage to keep up somewhat with the gardens when I had a spare moment or two- all the tomatoes and peppers on the roof are flourishing with a few tomatoes almost ready for picking! The garden in the ground however is practically a a wasteland. Between the lack of sun from the overgrown trees, no rain and much neglect on my part it's been suffering. I got my hands on a branch trimmer with an extension pole and the Russian cleared out a good portion of the overhanging branches but some were even too high to reach with the ladder. The little bit of watering I was able to do only seemed to help the weeds so by the time I got to this week I was tempted to bury the entire thing and start fresh next year. 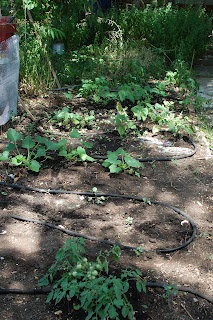 All was not lost tho- three of the summer squash are starting to perk up now that they have some sun and regular watering. The peas, lettuces and beets are a loss I think and only two sad looking leeks remain. I harvested all the garlic and got a few decent sized bulbs. The beans are struggling- I planted a tri-colour mix of yellow, green, and purple and they all sprouted but area pretty scraggly lot that are just beginning to flower. I seeded another row today in a spot that gets more sun so hopefully I'll have a late crop this year. All of the tomatoes I seeded are on the roof but I ended up with a few volunteers in the ground that got to be a fair size before I noticed- one is currently loaded with fruit and looks to be a tumbling cherry- I may have a better idea of variety once the fruit ripens! 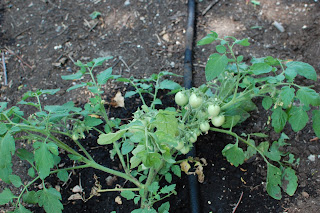 Speaking of fruit, I've done a bit better at picking than gardening. We had a bumper crop of cherries in Toronto this year compared to last and I managed to come home with bing, rainier and yellow cherries. Most got eaten fresh but Colette and I did up a few jars of our favourite drunken cherries. I got a decent haul of strawberries which also mostly got eaten; I attempted to dry a batch of the tiny wild ones in the oven but my brother mistakenly washed the tray thinking they were burnt leftover..sigh...I'm behind on preserving this year as well with only a couple jars of rhubarb in addition to the cherries. I have about 6 cups of red currants in the fridge waiting to be done but I think I may end up freezing them for now since the heat has been just too much to contemplate canning lately. 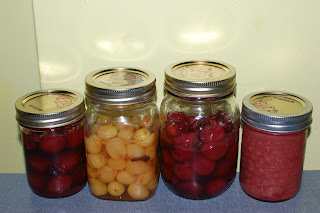 The highlight of the fruit season so far however is that my raspberry cane, a volunteer that sprouted from a seed 6 years ago, finally produced berries this year and to my absolute delight they are black raspberries! To me there is no finer thing on earth than a black raspberry- they bring back memories of berry picking in the woods of the Laurentian mountains when I was a kid, and you rarely see them around here. I'd post a picture but I ate every last berry right off the cane. Maybe next year.