Help for Bees and Other Pollinators! 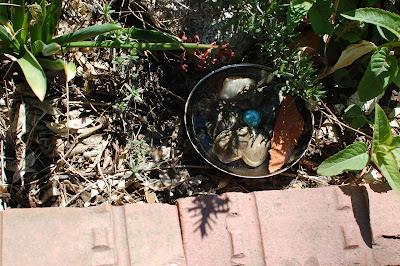 Seems like the news is full of stories about bees these days, whether it's dire warnings about colony collapse disorder or the even more frightening news that Monsanto recently purchased Beeologics, the bee research organization which identified them as a possible contributor to the demise of pollinators. So it's nice to hear about things we can do to help our pollinating friends. I mentioned previously that I am hosting a pollinator nesting box as part of a research study being conducted by Scott McIvor. You can read more about the work that he and others are doing here and you can even sign up to host a nesting box yourself if you are in the Toronto area.

I also want to share this wonderful video from the David Suzuki Foundation which shows some simple things you can do to help our native pollinators.

In addition to the nesting box, I have two bee baths hidden amongst my plants but I confess I didn't know about using them to control pests - I just think they are a pretty addition to my gardens. The only downside is that the farmcats have figured this out too so they sometimes lie in wait, like lions at a waterhole waiting for unsuspecting game. My hope is that one of these times they get something that fights back- a nice sting to the nose or paw might deter them in future! 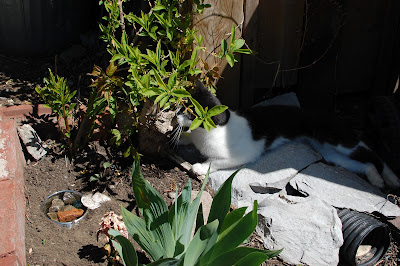 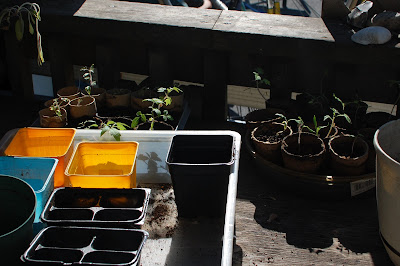 Back in early March when we were experiencing record breaking warm temperatures it was hard not to get excited about an early spring. On top of the mild winter, many things got off to an early start and it looked oh so promising but I stayed cautious, starting tomatoes and peppers indoors on about the same dates I usually do. Earlier this month I did succumb to temptation and seed a few things in the ground a bit ahead of schedule but nothing that couldn't take the cold if it happened. In my head however I was convinced that the garden would be pretty much in the ground or ready to be transplanted by May 1, about two full weeks ahead of normal. I was downright smug in anticipation of getting a good jump on things - not a chance will I be waiting until May Long weekend to plant this year! I'd be eating lettuce and greens by June 1 and snow peas soon after! It was going to be the BEST YEAR EVER!

And then that last remnant of cold and flu season I had all but recovered from dealt me one final blow.  I spent most of  Easter weekend in bed with a cough and a fever. By Monday I felt like I was breathing through wet cloth. By Tues I was barely breathing at all, which necessitated a trip to the hospital, followed by multiple rounds of antibiotics and steroids, and culminated in ten days off work. A long slow recovery was hampered by an allergic reaction to one set of antibiotics, and a digestive system all but destroyed by the combo of all the other meds. I lost my sense of taste, my sense of touch, my balance, and sometimes, control of  things that shouldn't be mentioned in polite conversation. At one point I gave up and slept wrapped in a towel. I don't think I've ever been so miserable in my life. My ears are still ringing  weeks after I finished the last pill but at least I can feel my hands and feet again. To say I was knocked on my butt would be putting it mildly. 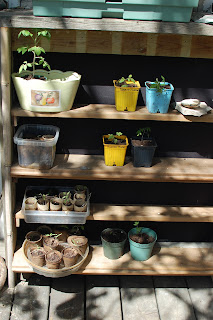 Not surprisingly, a lot of plans fell by the way side. My tomato and pepper seedlings are almost all still in their seedling pots and haven't really done much -only a few were big enough to pot up today . And although I've managed to start a few other crops in the greenhouse at work, I've yet to sow any new seeds at home which means I'll be lucky to have anything ready to go in the garden by June 1. So much for that early start.


It's not the end of the world of course; I've started my garden later than this and still had good results. In fact it may work out to be a blessing in disguise; all that warm weather in March has been followed by a colder than average April, with temps dipping below freezing at night all this past week. If things had gone as planned I'd have a bunch of leggy, house bound, overly anxious seedlings by now.  Things in the ground wouldn't have fared any better: it's been too cool to germinate most things and anything tender likely would have been lost to frost. The rapini I planted at the beginning of the month is only just beginning to emerge and so far there's no sign of the peas or lettuce. It's like the gardens are telling me there's no rush and for once, I'm content to listen. 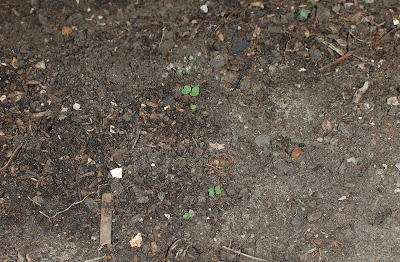 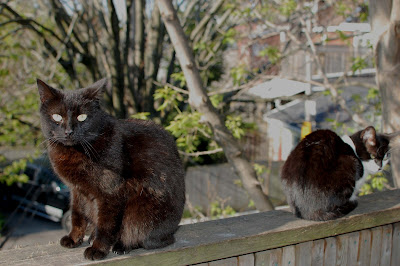 Total death count today was 6 butterflies and a moth. I managed to rescue an additional few but they were severely maimed. No wonder nothing gets pollinated in my gardens! Speaking of pollinators, my bee nesting box is back! Scott McIvor is still collecting data on various species of solitary bees and I am happy to be hosting a nesting box as part of his study. Hopefully the farmcats leave them alone! 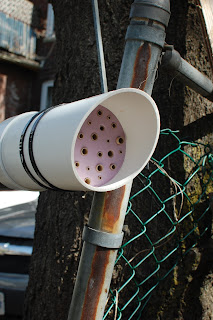 Posted by CallieK at 2:32 AM No comments: 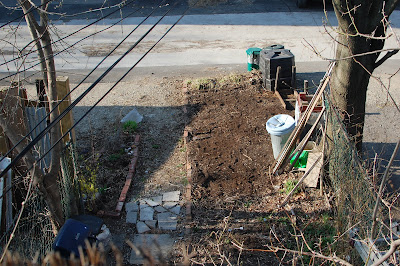 It seems that cold and flu season had one last virus up it's sleeve and I've been the lucky recipient of it since last week. On top of that I've been dealing with some family emergencies recently as well. My brother in St Catharine's had a near disaster with a table saw a week ago Friday- he caught his wrist with the blade and did serious damage to his soft tissues (thankfully not the bone). The surgeon was able to repair it and he should have near full function once it heals but he's looking at two months in a cast! Then my mom who has heart disease, had some issues and was hospitalized overnight -again thankfully it turned out to be not as serious as first thought and she's home again but worrisome just the same. It was a downright miserable week and I feel like I'm still recovering.
Not surprisingly I haven't had the inclination to post much and all of the challenges fell by the wayside. Of course life still goes on and stuff still got done so I thought I'd do a brief check in to prove I'm still alive and kicking.
One thing that's always guaranteed to shake me out of a slump is getting my hands dirty so I've been spending as much time as possible in the garden or preparing for it. The garden beds have been raked, the composters emptied, the rain barrle's hooked up again and a winter's worth of debris is gone. 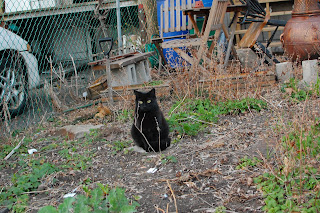 The farm cats are ecstatic to be outdoors again. They follow me around the yard, happily rolling in the dirt and climbing everything that can hold them. 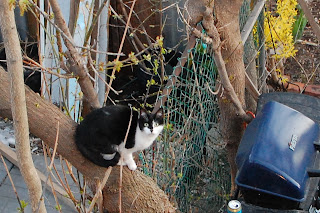 I even managed to coax some help from the Russian, trimming some branches and chopping them up for other projects. He works best on creating stuff and prefers to leave the actual gardening to me. I have some new ideas for trellising that I'll suggest to him to come up with the working model- he's usually pretty ingenious! 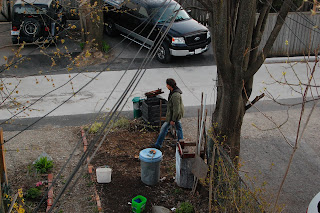 I'm excited to see the garlic I planted in the fall is already up- it's the first time I actually remembered to plant some! 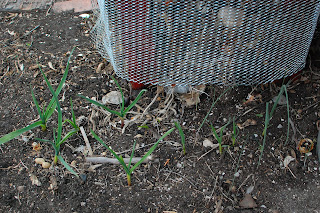 The strawberries look healthy as do the raspberry canes and the rhubarb is up too. 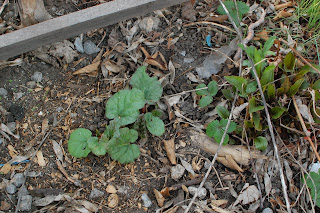 Up on the deck, the herbs are making a comeback- the mild winter allowed them to winter over even in the shallow pot so we are already eating fresh oregano, thyme and sage. Things are moving towards a bountiful growing season! 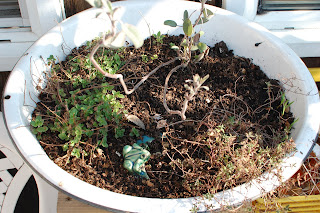 I still haven't managed to get any seeds for cool weather crops in the ground yet but I have rapini, peas and lettuce seeds set out to plant this weekend. It may still be a bit too early now that the temperatures are seasonably cool but I'm going to chance it anyhow since the soil is warm and the beds are ready. If they take a little longer to germinate so be it, at least they're in the ground. 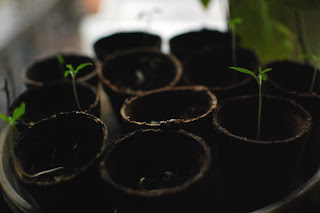 Inside things are moving along as well. About 50 % of the tomatoes I pre-germinated survived being transplanted in soil- more might have survived had I been paying better attention and planted them earlier/ kept up with watering immediately afterwards. I still have a respectable amount of seedlings, just over 20, but I have only a small number of a few varieties, and a couple varieties of which none survived. There's still plenty of time to reseeded thankfully. I've got a couple of things started in the greenhouse at work as well and I'm looking at what needs to be seeded next- it's still a bit early for most things but I'm anxious to get going.
It's Easter this weekend and I hope you all enjoy the time off with family and loved ones, and puttering around in your own gardens! 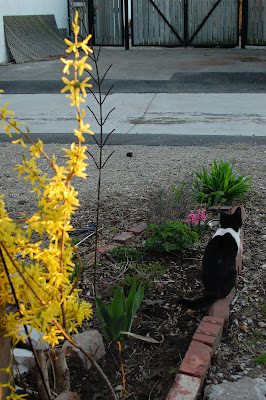