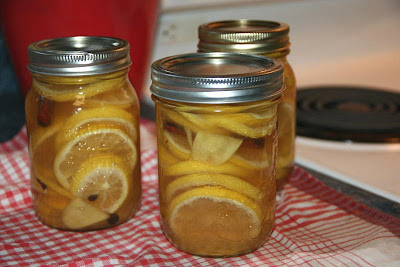 Colette and I were overjoyed to learn that our first challenge was to make something with citrus fruit and for us the choice of fruit was a no brainer- we love our lemons! Local grown citrus is not a possibility here in the Great White North but organic lemons abound so we stocked up.

What to do with them was less obvious. We spent a fun evening earlier this month checking out many different options and it came down to two possibilities. Colette's first choice was a Lemon and Quince chutney but we quickly realized that we'd missed the boat on quinces, a truely seasonal fruit. We had thought of trying another recipe but in the end time ran out and we went with my first choice - Spiced Lemon Pickles.

We found the recipe 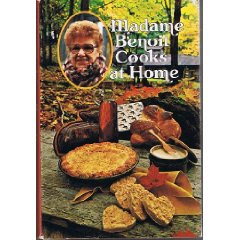 in one of my favourite cook books, Madame Benoit Cooks at Home published 1978. Decades before the plethora of celebrity chefs, Jehane Benoit made a name for herself as one of Canada's most prominent food experts. She studied at the Cordon Bleu in Paris and graduated as a food chemist from the Sorbonne in 1925 - 25 years before Julia Child! Although she never attained the worldwide recognition of Child, Madame Benoit was a fixture on Canadian television from the 1960's to the mid 80's and wrote numerous books. Most of her recipes were based on traditional French Canadian dishes and her section on preserves contains many recipes that have fallen by the way side and deserve to be brought back. Spiced lemon pickles seemed like a good place for us to kick off the Canjam!


The recipe is simple and straight forward: 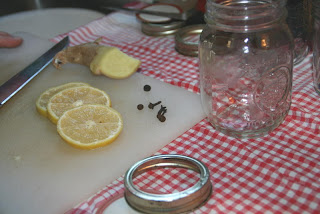 Wash and thoroughly dry the lemons. 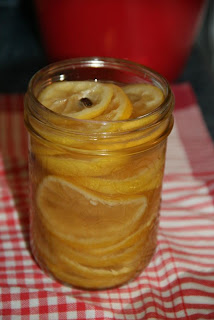 Cut them, without peeling, into crosswise slices one-quarter inch thick.
Combine the sugar, salt, spices, water and vinegar in a saucepan.
Boil five minutes.
Drop the lemon slices into the boiling syrup and boil one minute.
Pack the lemons into hot sterilized half-pint jars.
Cover with the boiling syrup, leaving 1/2" headspace.
Process in a hot water bath for 15 minutes. 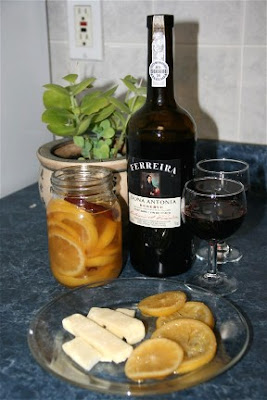 The recipe claims to make 6 250 ml jars but either our lemon were small or our jars were big because we got 3. ( One jar each and one for trading!)
The pickles should sit at least 3 weeks before opening but we miscalculated the date so ours were 2 weeks old when we open them. No matter, they are absolutely delicious! According to Madame Benoit these make "an ideal gentleman's gift" and per her suggestion we tried them with some aged cheddar and a glass of port- Heavenly!
Posted by CallieK at 9:59 AM 11 comments: 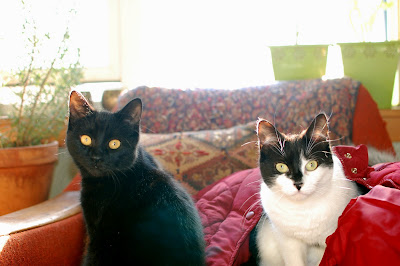 It's minus 15 C without the windchill today but the sun is shining and it makes me antsy to be doing stuff. Indoors of course. I am not one of those crazy Canadians that likes the cold. I'm a big fan of winter sports as long as I'm inside watching them on tv. ( Can't wait for the Vancouver Olympics!) So to keep myself from going completely stir crazy I need projects- lots of them!

So far I have kept myself pretty busy. Thi

s past week I had lunch with my aunt to update her on my genealogy research. She gave me a ton of photos to scan (with my new scanner!) and lent me a pile of books- a new series that I am devouring in quiet moments. I also met with Brenda Dougall Merriman who was kind enough to share her research on our mutual family name ( but sadly not mutual ancestors) She also introduced me to a fantastic book -History of the Counties of Argenteuil, Quebec & Prescott, Ontario., written in 1896! ( Okay maybe it's only fantastic if your family is from there or you are some kind of Canadian history nut). 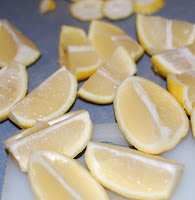 over for an evening of CanJam planning. We decided in the interest of fairness we would each pick one recipe, make them both and have a taste off before making our final decision. We perused an number of recipes, some old and some new

and narrrowed it down to two, with a back-up if we can't obtain the ingredients we need for one of our first two choices. Then because we were all fired up and I had lemons in the fridge, we made preserved lemons just for the heck of it. We did two different versions- one based on Joel from Well Preserved's which uses a lot of salt and another version that suggests you crush the lemons slightly in the salt to release the juice and tops it up with more lemon juice. Both jars are currently doing their thing on my window sill and it will be a few weeks before we can test the results. We'll be making one of our chosen CanJam recipes tomorrow!

The most exciting project- Maple syrup! The gang at Not Far From the Tree have a new project- tapping maple trees and making syrup right here in downtown Toronto. Crazy? Ambitious? Brilliant? We'll see! Right now we are just in the planning stages so there's not much to tell. I'll post more when we have an actual plan!
Posted by CallieK at 1:33 PM No comments:

It can be difficult to eat local when you live in a country that is covered with ice for a good portion of the year, especially when it comes to fresh produce. My resolve to eat seasonally weakens when my body begins to crave fresh greens and I have to walk quickly by the produce section of the grocery store so I don't get tempted by things like green beans from California and asparagus from South America. I confess I caved last week and bought fresh dandelion greens but I justified them as medicinal- my liver was suffering from a overdose of holiday treats!


January is usually the most challenging - it's the point in the year where I'm looking less than longingly at the pile of root veggies, the stash of frozen, dried and pickled things from last summer is dwindling and it's too early to start planning for the gardens of this summer. Last Christmas my sister gifted me with a sprouting kit and it's been a godsend. Sprouts don't care if there's not enough daylight or it's minus 11 out! All they require is water and a place to start growing. The kit is simplicity in itself- a jar, some netting to cover the opening, an elastic band to hold the netting in place and some seeds that will sprout. 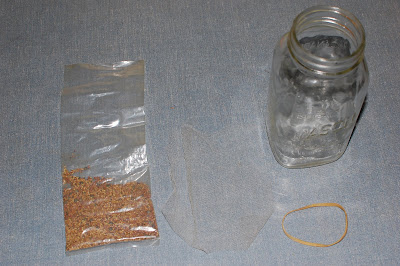 My original kit included a spicy lentil mix- green lentils, mustard seeds, radish seeds and non GMO canola. I experimented with all kinds of different seeds and dried legumes and found everything was a success. My favourites include arugula, soybeans, mixed lettuces and mustard seeds- I like things with a bit of bite. Sprouted chickpeas are delicious and apparently make a mean hummus but I've yet to try it- I keep eating the sprouts right out of the jar.

Here's the step by step directions: 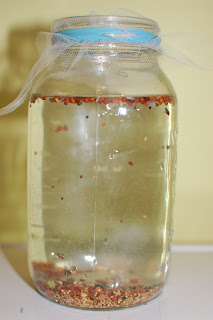 Start with a clean jar. Place 1-2 teaspoons of seed mix in the bottom. Cover the jar mouth with netting- my kit included a 5" square of tulle but any soft netting would work. Secure to the top of jar with elastic.

Next day drain water and then refill with fresh cold water. Shake the jar gently to loosen any clumped seeds and drain. Place jar in a bowl so that it sits at a an angle to drain the remaining water. Put the bowl in a warm spot- I use a sunny window sill but they really don't even need the light. 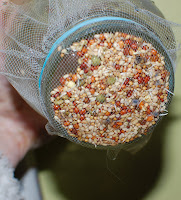 Rinse the sprouts as above every morning and evening- I put the whole jar in the sink and let cold water run for about 30 secs, making sure any clumps are loosened. Drain and place back in the bowl. Make sure to rinse the bowl out every time too or it will begin to smell unpleasant. You will begin to see sprouts as soon as the first day!

will have a lovely mess of sprouts ready to eat! You can remove them all from the jar at this point and refrigerate - they'll last up to a week if properly stored. I have left them in the jar to continue growing a few days more but eventually they begin to need more nutrients and start to deteriorate. Easier to start a fresh jar!
Posted by CallieK at 9:24 AM No comments:

The CanJam officially begins today and we have our first ingredient- citrus fruit! Already Colette and I are perusing recipes and ideas- Should we use lemons? Limes? Grapefruit? I've never been a marmalade fan so maybe now is a good time to try a few and find a recipe I like. So many options....