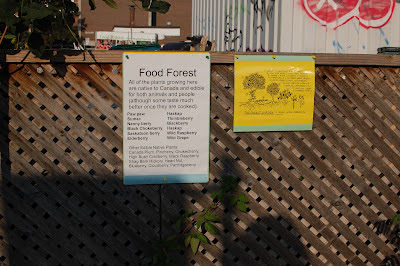 It was during my trip to England last summer that I became enamoured with hedgerows- great thickets loaded with plums, blackberries (brambles), currants and gooseberries, all just waiting to be picked by anyone brave enough to attempt the thorns. I admit I came home with a serious case of hedgerow envy and I was intrigued and excited when I read FarmGal's post on “Food Producing Mixed Hedgerow”.  This seemed like something that could be applied in either a rural or an urban setting so I made it my mission to develop one at FoodShare as part of our demo gardens.

Last  month FoodShare co-hosted an worldwide Urban Agricultural Summit and as you can imagine this had the whole place scrambling to put on our best face. For me that meant getting the greenhouse in order as well as making the grounds and gardens look well maintained overall. Since an attractive garden means different things to different people, there were some interesting moments and conflicting directives from various sources; the battle to save the naturalized garden from the determined weed pullers was only part of the fun! In the midst of all this confusion I seized my chance and convinced the powers that be that establishing a food forest in an under utilized spot behind the greenhouse was just the sort of project that would impress the visiting dignitaries. I even managed to get a small budget to purchase a few trees and shrubs for it! 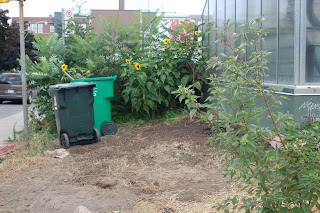 The area in question was overgrown with kale from last fall gone to seed, a few stray sunflowers and a lot of weeds. But it also had some sumacs along the fence to the compost yard, a nice sloping purchase and a rainbarrel already in place. I did some research and went on the hunt for suitable indigenous edibles. As it turned out I had to go a lot further than anticipated to find most of the plants but a field trip to the Niagara region is hardly something to complain about! 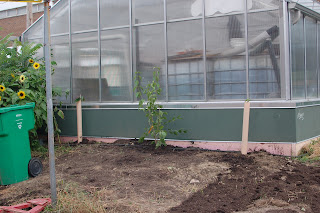 My first purchase for the forest was two pawpaws. I've been fascinated by pawpaws ever since I was a child because they seem so tropical, and in a sense they are. The only remaining stands of them growing in the wild here in Canada are in the southern most tip of Ontario, near Windsor. We purchased ours from Grimo's Nut Nursery, in Niagara on the Lake, also on the most southern border of Canada. These are grafted from two different species to ensure pollination and  can hopefully survive our winters here in Toronto. I also hope they will some day bear fruit! 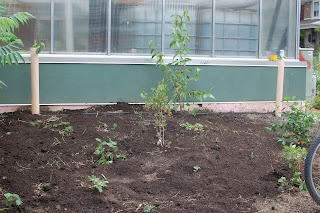 Other species I chose for our forest were ones I'd heard about from FarmGal- black chokeberries (Aronia Melanocarpa) which I got two of,  and highbush cranberries (Viburnum trilobum) which I hope to add later. Unfortunately on the day we went to get them, the nursery had just sprayed for viburnum beetles with some thing highly toxic so we opted  not to bring them back with us. Instead I was able to locate a Nannyberry tree (Viburnum lentago) elsewhere; it should grow quite tall so I placed it in the canopy row between the pawpaws. Like the pawpaws, all of these species need two plants for pollination so I will be adding  new members to the forest, hopefully before winter. 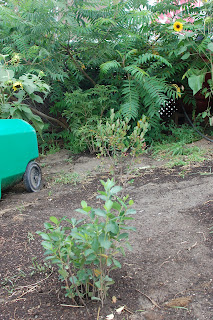 We were alsoable to purchased  an elderberry, and a saskatoon, which along with the sumacs and chokeberries make up the middle layer. On a cottage trip up north I found some wild raspberries, and  thimbleberries  for the undergrowth layer, and wild strawberries for ground cover.  I also added a thornless blackberry and a wild grape vine to grow along the fence and we planted some haskaps along the front next to the sidewalk. The forest was starting to fill in nicely and then for no apparent reason, we got hit with some random acts of violence. Someone destroyed all of the sumacs one night, then ripped out some the thimbleberries another. The final straw was a brazen daylight theft of an entire black chokecherry bush- while I was working inside the greenhouse! Thankfully I was able to appeal to nearby neighbours to keep watch for us and there have been no further damages recently. 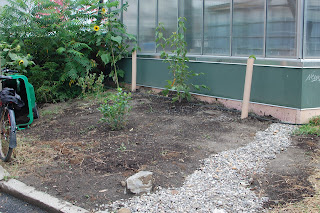 With the help of some volunteers, I created a dry stream bed to separate the forest from the vegetable gardens- the existing dogwoods on the other side of the stream add to the forest feel and there's a birch tree and a winterberry to be added to those for added colour. We also put down some wood chip mulch as ground cover to simulate the forest floor for now. Everything is doing well and the area looks very pleasing. And hopefully, next year there will be all kinds of fruit and berries to be picked! 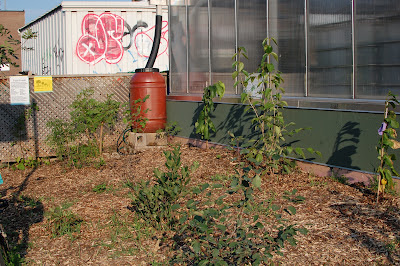