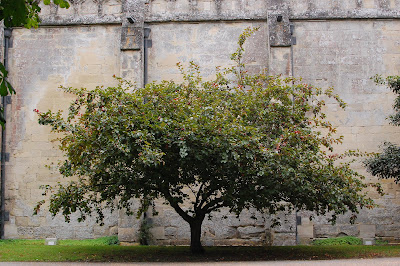 As all good things do, my trip to the UK ended much too soon and I arrived back in Toronto yesterday. My intentions of posting while away were thwarted by technical difficulties on many fronts- poor internet access, incompatible wireless features and then my laptop died altogether. Thankfully my camera had no such issues and though it required several battery recharges, I managed to take over 800 photos! And although the primary focus of my trip was to do some genealogy research, this did not mean that I was too busy to think about gardening and canning- far from it in fact. Three weeks was plenty of time to wander about sightseeing and thankfully my aunt who was travelling with me is of a similar bent. Like me, she is a avid reader and gardener so we stopped in as many book stores as cathedrals, and photographed as many gardens as we did Roman ruins. 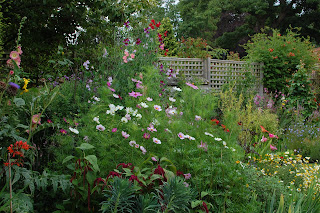 English country gardens are renowned for good reason; the moderate climate and perpetual precipitation makes for ideal garden conditions for many plants and we were astounded at the lushness of the greenery and abundance of flowers. Many plants that I am familiar with here in Canada were barely recognizable as the same plant-we saw rosemary the size of juniper bushes, hollyhocks that towered over us, and hydrangeas that resembled pink and blue sheep! Not to mention the lavender that grows everywhere staining entire fields a vivid purple as you drive by. 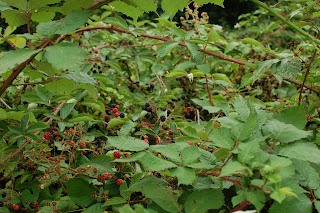 But the plant that amazed me the most was blackberries- they were literally everywhere and loaded with fat juicy berries! Better known as brambles in the UK, they are so prolific that we took to munching on them everywhere we went and I couldn't figure out why no one seemed to pick them until I tried to gather more than a quick handful. Brambles sport some serious thorns which latch onto skin and clothing alike, making a berry picking expedition resemble the losing end of a cat fight. I persevered however and one glorious afternoon I succeed in gathering an amount worthy of canning. I still have the scratches to prove it. 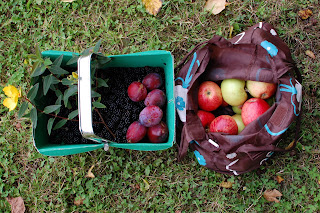 Blackberries weren't the only thing that was easily spotted; I spied many a fine apple tree and on my afternoon pick I managed to gather a large bagful of sweet juicy apples as well as a few stray red plums. At this point in our trip we were enjoying a visit with friends and I couldn't resist cooking up some blackberry applesauce and some plum blackberry jam. Sadly I didn't want to risk a confrontation with Canadian Customs on my way home so I left it all for our hosts to enjoy.

I did however manage to bring something home with me. Proper 4 piece canning jars with a glass lid and rubber seal were invented in the UK, by the Kilner family in 1852- the same design was later copied by Mason and all the current canning jars we know today evolved from that design. My surname name is Kilner and although I have never found a direct link to the glass making Kilners (my lot were woolen manufacturers), the glass factory existed in the same area of England that my family came from. Whether we're related or not, I still longed for a jar or two with my name on it and although the original jars are now collectible and difficult to find, another glass manufacturer is now making them again so it was my mission to find some to bring home with me. At first this proved more difficult than you'd imagine- I got lots of blank looks and a few comments about how no one cans anymore which surprised me! Eventually my aunt found a hinged storage jar with the Kilner brand on it in Scotland so I was somewhat appeased but still held out hope for the actual canning jars. And fortune shined on me-a random stop in a small home decorating store in Henley-on-Thames provided me with both a quart and pint jar and a box of seals. Based on the price (over 3 pounds each for the jars and almost 6 for the seals!) it's no wonder very few people can in England. I can buy a case of jars here for less than I paid for 2. But the pleasure of seeing my family name in big letters across the jars is priceless to me and I paid it happily and stuffed them in my overflowing suitcase to bring home. 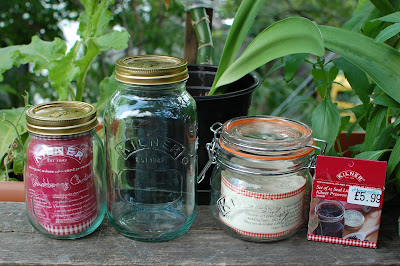 So I'm home again, with loads of pictures and stories to share. And I have some other exciting news on the home front, which will have to wait for another post. My gardens survived without me although they've looked better so I have some work to do. It's also time to start some serious canning- I spotted pickling cukes at a good price today which means the lazy days of summer are almost behind us and I'm itching to get going. England was wonderful but I'm glad to be home.