Close behind my love of gardening is my need to build things with wood. Although our new apartment came with a lovely deck already in place I can always find ways to improve it. My first task was to design and build a work/potting bench and some seating. Simple you'd think, but made complicated by the fac 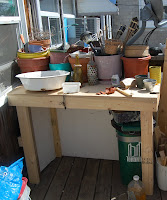 t that this entire row of buildings were built at an angle to the street. We'd already run into the fun that comes of trying to build square fixtures in a house without any right angles. A similar issue exist on the deck so it took several days of measuring and calculating angles to get the plans in place. Fortunately we live right across the street from a large building centre so carrying all the supplies home is a breeze and multiple trips are no hardship. In a couple days I had built a solid work bench and a cozy corner seating bench. I left the space under the work bench as storage for the green bin, compost and recycling bins and lined it with styrofoam to block the o

dors associated with them. In the winter it will make a good sheltered place for plants that need to winter over outside in pots. Under the seating bench is more storage for coolers and gardening supplies.


With that finished it was on to the next project- a clothesline! I have had a clothesline at every apartment I've lived at in Toronto and consider them to be an absolute neces 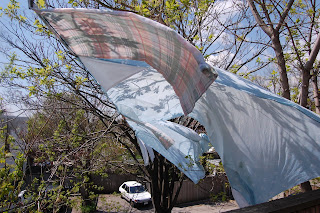 sity. Although we actually own a dryer it rarely gets used, for both financial and practical reasons- running a dryer in an apartment especially one without air conditioning is expensive and masochistic. I prefer to line dry everything, even in winter, and find that it also increases the lifespan of our clothing. not to mention the smell of line dried bedding beats fabric softeners any day!
Posted by CallieK at 12:23 PM No comments:

Spring 2009- the beginnings of a garden! 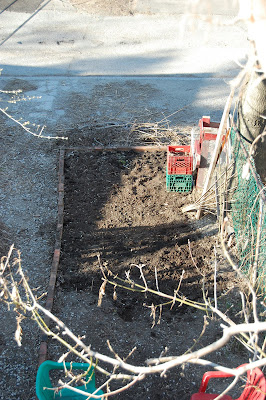 As soon as it was warm enough I was outside digging in the dirt. Our downstairs neighbours have previously done a bit of gardening and the landlord provided them with some topsoil but it didn't take long to realize that it was a very shallow layer on top of the previous gravel parking spot- shades of my former back yard...Using the piles of old bricks that seem to come with every yard space in Toronto, I extended the previous garden by another 10 feet and began to scrounge for good soil to fill it in with. I hadn't been able to bring much compost from our previous place so I had to get resourceful. First stop - Environmental Days sponsored by the city! Every year they dump huge piles of leaf compost free for the taking at various spots around the city. Leaf compost is not ideal nutrient-wise but it's free and it adds bulk to sandy soil. At some locations there's a line-up to get to the pile and fill your wagon /bundlebuggy/ garbage bags. This year I even saw people wheel up their huge recycling bins on wheels and I was jealous that we didn't have one yet. Never the less my friend and I filled multiple garbage bags and loaded them in a borrowed vehicle. Next stop was the High Park Zoo! There we managed to score some 'zoo poo'- slightly smelly and mixed with bedding straw but a great start to the new composter I had built in the yard. Still needing more I was forced to purchase some bags of 3 way mix and manure to get about 4 inches worth of decent soil. It was a beginning. 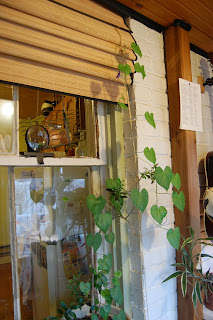 emerged. The best news was a large patch of rhubarb appeared near the base of the sumach tree, in a spot hat I hadn't dug up thankfully! Inside my lovely sunporch the seedling trays and wintered over plants were happily doing their thing until the weather warmed up. With the wall of south-facing windows basking everything in hours of sunlight, I was astonished to see how well everything did inside this winter- my former space was lacking in both light and heat so growing seedlings was a challenge and I lost many plants every previous winter. You can imagine my surprise when a morning glory not only grew but flowered inside in April. I even sprouted an accidental tomato in January that was looking lovely and healthy until someone opened a window and it got frost nipped. it was a long spring this year so although I was able to set trays and pots outside often in April, some of them got nipped and nothing went into the ground until well into May. Which left me time to work on other projects - like building things!
Posted by CallieK at 1:36 PM No comments:

Nov 1, 2008 we moved to a new apt, not far from the previous one. Although we weren't thrilled with moving, the new place offered a few bonuses that the previous one didn't-a heated, south facing sunporch, a large deck, and an actual backyard! The yard even came with a loosely defined garden so although it was late in the year, one of the first things I did was dig up as many of of the plants from my previous gardens that I thought might survive and trek them over to the new place. I dug up the rose and clematis, the magenta violets, echinacea, rubekia

and the lilies. The rose was especially challenging since it had grown to over 10ft tall; I was forced to prune it back to a more manageable 5 ft and it lost a lot of roots.It resembled a bundle of dead sticks once I replanted it.Picking spots somewhat at random. I dug them all in and hoped for the best.
Posted by CallieK at 6:06 AM No comments:

If you lurk around the back alleys of many older Toronto neighbourhoods you will see an abundance of gardens designed in the old world style. The Italians and Portuguese are well known for their courtyard style gardens complete with fruit trees, and of course grape vines. In 2008 my frien 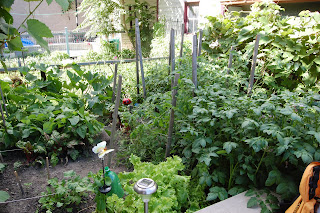 d Colette purchased her first home- an older house in an existing Portuguese neighbourhood, complete with a walled garden, two grape arbours and an interlock brick patio. She graciously offered to share the garden space with me so early in March we measured the space and began laying out our garden plans on paper. Tomatoes and peppers were a must- the stakes were already in place from previous years. We also happily discovered some volunteer onions and garlic already sprouting. Our plans included lettuce, bush beans, carrots and beets, 3 kinds of winter squash, pumpkins and some zucchini. We eventually decided to add potatoes to the mix-we were definitely ambitious!

Digging the soil was the first task and an exercise in archeology. Apparently composting in this garden included bits of metal, broken tile, string, wood and what we hoped were soup bones. The soil itself was heavy clay and although it seems nutrient rich there was the issue of it compacting into a solid mass when wet. This was made more apparent as the summer progressed and the root veggies failed to produce the type of roots we were hoping for. Lots of leafy greens but not much else. The tomatoes and peppers started out well but were eventually crowded out by the grape vines that we neglected to cut back. One particular tomato- a yellow cherry, did exceedingly well, producing a prodigious amount of fruit right up until frost hit. However it also sent out 8 ft branches in all directions that we were too timid to prune and too overwhelmed to keep staked, thus contributing to the jungle that our tomato patch became. Lesson learned- plant tomatoes further apart and prune the indeterminants.

As for the other crops- lettuces were great, beans were plentiful and all the squashes did well even if they had a tendency to take over. The baby squash were a magnet for the rodents in the area-we lost a few and the remainder had teeth marks but we managed to see a few of each 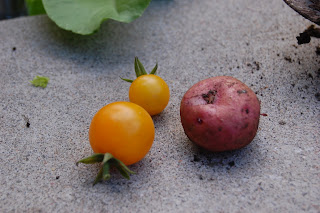 through to maturity. The potatoes were the biggest surprise- we planted early reds and had to fight the temptation to dig them up once they had finished flowering- again our lack of knowledge was a bit of drawback because we had only the rather vague instructions from the seed package for advice. We ended up waiting until late Sept at which point the vines had yellowed for the most part and we were delighted to find tons of rather large potatoes- about 20 lbs in total! To my taste however they were bland and not as good as the tiny ones I grew in a bucket. Perhaps it was the particular type we grew or maybe we just had bland soil.

All in all, our first year in the ground was a moderate success and we definitely learned a lot of valuable lessons.
Posted by CallieK at 2:55 PM No comments: