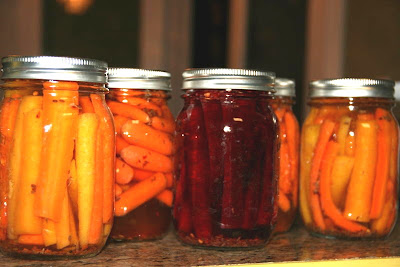 Colette took the leftover carrots from our first attempt home with her and put them to good use. Here is her first guest appearance as a blogger- hopefully there will be more!

With all the left over carrots we had, something had to be done!
Based on the dill carrot recipe in the Bernardin book and I added a few of my own touches without modifying the acidity.
For the brine:
2 Cups white vinegar + 3 Cups Cider vinegar (because there wasn't enough of 1 kind in the house)
1 2/3 cup water
4 tsp pickling salt
1 2/3 cup granulated sugar
Bring brine to a boil for 5mins.
Meanwhile: I sliced up the carrots as long as the jars and julienned them. I also used up a bag of 'baby' carrots I had in the fridge.
I boiled the carrots in water for 2 mins. (which I don't know if I'd do again as I suspect they may be too soft/not crunchy).
I could have saved a step and boiled my carrots in the brine - but I didn't want the purple carrots to bleed into the others again.
Sterilize the Jars - 250mls.
1 tsp dill seed in each jar
1/4 tsp chili flakes
stuff with the julienned carrots
fill with brine
Can for 10 mins.
Ready in 4 weeks. We will update you on whether they are good.
Posted by CallieK at 11:43 PM 1 comment: Our Carrot Top Bouquet!
February is for Carrots! Okay so it doesn't have the makings of a great slogan but around here we work with what we've got. And in Feb that's not a heck of a lot when it comes to fresh produce. However, locally grown carrots are still easy to find and relatively inexpensive. I should know, I've eaten so many of them this winter that I think I'm starting to turn orange!

So when the CanJam ingredient for Feb was announced Colette and I figured it was another no brainer- we've been pickling carrots for years and both love them. All was good until I spotted these lovelies at the local organic greengrocer and was seduced by the vibrant colours. Purple, light orange, deep orange and yellow carrots! 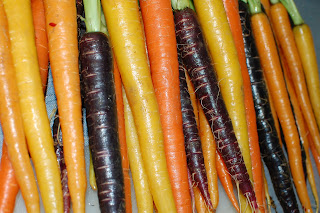 Never mind that they taste pretty much identical to the ones we already have, or that they cost 100% more than the local grown ones, all I could envision was those jewel tones gleaming from freshly canned jars. I located a recipe online for Calico pickles that called for carrots, cauliflower, pearl onions and green peppers. We drew the line at the peppers- we were already way outside our local produce plan ( the carrots while organic, came from California!) and we decided that we'd add more of the other veggies instead. Since the veggies were being cooked in the brine before canning we'd still be safe with the amount of vinegar called for in the original recipe.


I knew from eating them in the summer that purple carrots leach their colour when cooking but I was hoping we could reduce this effect by cooking them in separate pots and layering them in the jars. Plus anyone who's ever hand dyed easter eggs knows that vinegar is a mordant ( dye fixer) so I was hoping for similar effect with the carrots. To keep with the colour theme I also bought two colours of pearl onions, white and purple. There were also yellow pearl onions and I was sorely tempted but these were fast becoming the world's most expensive pickles so I restrained myself. 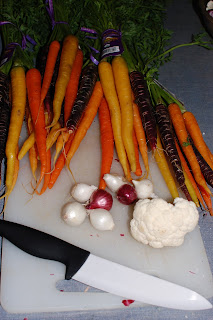 we decided to divide the brine and cook the purple carrots and onions separately. We ladled them into the jars first and added the remaining mixture on top. Almost immediately the colour began to diffuse through the entire jar until everything was pink! The lovely multi coloured carrots practically disappeared.

We opened a jar last night to sample and they are pretty tasty - a bit vinegary and quite spicy, especially the cauliflower. And absolutely bright pink! So we've decided to rename them. We have two possibilities but can't decide which holiday theme to go with. We did some food staging to see what suited them best- you be the judge! 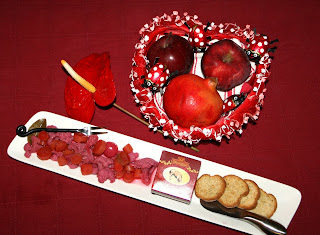 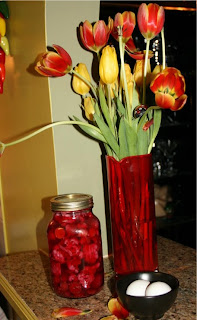 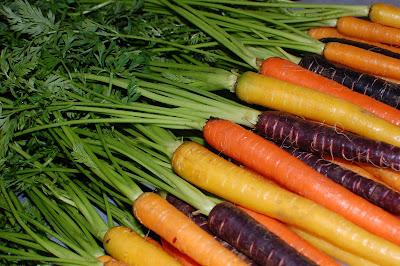 February is round two of the CanJam and the secret ingredient this month is Carrots!
Colette and I were eager to get started and we had a brilliant idea- something we imagined would be as amazing as our pickled lemons! Found the perfect recipe, gathered all the ingredients, whipped up a batch... and the results are, well, lets just say they're not quite what we were hoping for but definitely interesting! If you want to know more, you'll have to come back for the official Canjam post - the deadline this month is Friday Feb 19.

If you're like me you're already itching to get planting in this summer's garden. Nevermind that the ground

is still frozen solid, Feb is the perfect time to make plans and start seedling trays. I'll be starting my pepper seeds in a week or so- they take the longest to germinate so it's good to get an early start. I'm also drooling over seed catalogues and making lists of everything I'd like to grow this year. One great place to get some ideas (and seeds!) in Toronto is Seedy Sunday. This year it's on Sunday, Feb. 21st, 12:30 - 6pm at the Wychwood Art Barns, 601 Christie Street, Barn 2. Bring seeds for trading, money for buying and bags to carry it all home!

We'd Tap That! The maple syrup project is coming together nicely. We'd had great response from all kinds of sources and looks like the pilot project will begin towards the end of Feb, with plans for a Sugaring Off party sometime in March.

You can read more about it here:
http://www.notfarfromthetree.org/archives/1116

Or listen to Laura Reinsborough talk about it on Metro Morning here:
http://www.cbc.ca/metromorning/2010/01/28/

I can smell the sap boiling already!
Posted by CallieK at 4:49 PM 1 comment: