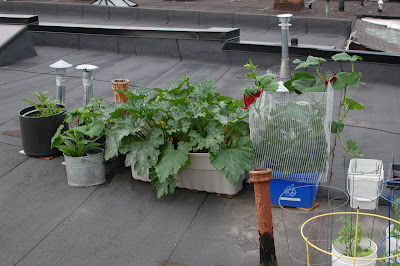 You'd think winter would be the furthest thing from my mind in the middle of July. Here in Toronto we just survived our first heat wave of the summer and it was a doozy- temperatures in the mid 30's with humidex values making it feel more like 45 C.  Thankfully I managed to escape the worst of it by running away to Sarnia and living at the beach for most of the week. I have the Russian to thank for keeping the bins on the roof watered while I was away. All looks well up here! 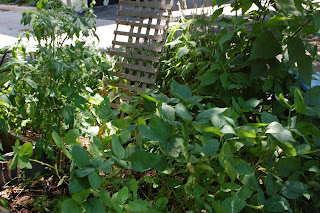 Amazingly the garden in ground needed NO watering- the new raised beds worked even better than I envisioned! The combo of  the  rotting wood I added to the bottom layer, and the buried seeper hose hooked to the rain barrel provided enough moisture that everything stayed lush and green even through 6 days of record temperatures. Turns out those huglekultures really do work! 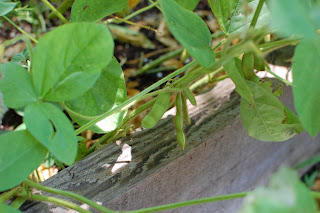 So why on earth am I thinking ahead to cold and snow? Well for the first time ever my gardens are producing more than we can eat fresh. Yesterday I picked a mess of beans and there are more to come. The zucchini, which are loving life on the roof, are providing a fruit a day. We've been eating onions for weeks, the garlic are almost ready to be dug and the edamame should be ready anytime.Which means  I'm running out of room in the fridge and I need to be preserving some of this goodness so we can enjoy it when the gardens are long buried under snow and ice. 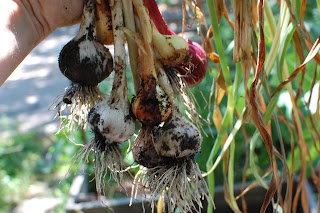 The garlic is easy- as the greens die down, I've been digging up the bulbs and leaving them to cure in the sun porch. I've even braided a few! 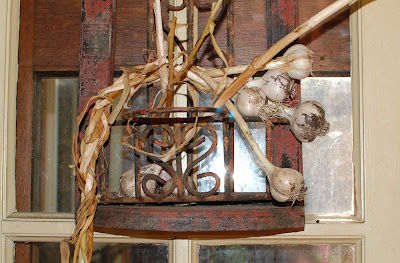 Normally I would just freeze any excess beans and edamame  Freezing is my preferred method of storing many vegetables - if you freeze them as soon as they're picked and do it correctly, it keeps the texture and flavour better than canning. However an inadvertant thaw/refreeze would turn them to mush and we've been experiencing rolling blackouts ever since the big storm that hit Toronto at the beginning of the month.. So I'm thinking I will pressure can the string beans and I need to look into how that can work with edamame- likely I will have to shell them first. 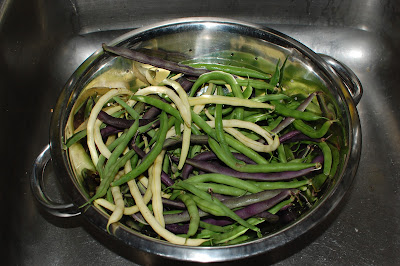 In the past I have a had difficultly growing zucchini, which was frustrating, given its reputation for overabundance. This year I am pleased to have a glut and for now at least we've been eating them as quickly as they appear but I suspect that may pale soon. Since it's never been an issue previously, I'm not exactly sure how to preserve them other than relish which I'm not a fan of, or use them in baked goods. Suggestions welcome! 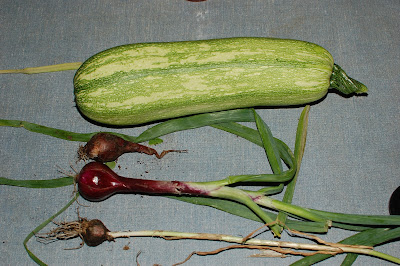