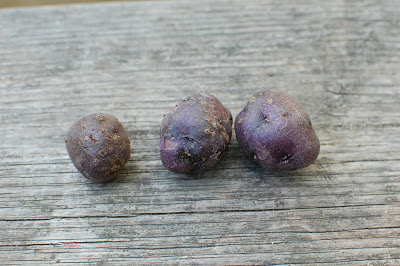 Three potatoes! That's my entire crop from the potatoes in a bucket. Or in this case, garbage can. And since I actually planted 5 ( 3 purple, 2 banana fingerlings), I say that was a loss. Thankfully the pail didn't take up much in the way of garden real estate and the mountain of soil can now be added to the garden bed but it's still a bit disappointing. I'm not sure why they didn't produce; I had lovely, apparently healthy potato plants until about two weeks ago. They hadn't flowered but I wasn't too worried yet. Then one day I noticed that all the new growth was turning yellow and wilting. I had a closer look and saw millions of sow bugs living in the pail - we've had an unusual amount of those critters this year. They normally live on dead and decaying matter and can be very helpful in composting larger stuff like sticks. But they can and will eat living organic matter if the opportunity arises. They've been nibbling on any beans that touch the soil this summer and I don't know if they were responsible for the original holes in my eggplants but they sure made themselves at home in them.

I can't see what would be appetizing about the roots of a potato plant but when I pulled the plants out yesterday there were no roots to speak of and they were mushy at the soil level. I suspect it may also have been a drainage issue- I used an old metal garbage pail which I thought was already leaky so didn't put drainage holes in it. I lined it with a garbage bag, with holes in the bag and a drainage layer beneath it but when I emptied it there was a fair amount of water and the smell of rot was apparent. So perhaps I am maligning the sow bugs in error and they were actually doing me a service by eating the rotted plants. The three potatoes don't appear to be munched on and I didn't find any half eaten ones. I guess we'll be buying potatoes as usual this winter- thankfully local potatoes are abundant and inexpensive. 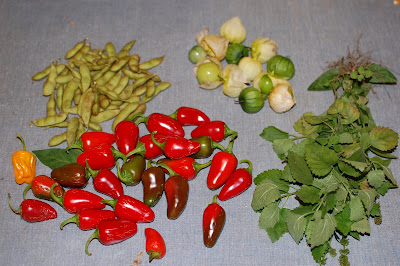 On the plus side I have a bumper crop of soybeans this year. We've been eating them fresh all summer and now I'm freezing batches of edamame for snacking all winter. I'm also harvesting lots of peppers, both hot and sweet and a decent crop of tomatillos. The tomatoes are still producing lots but fall is just around the corner so it's time to make salsa and pickled jalapenos and all those spicy preserves that will keep us warm all winter! 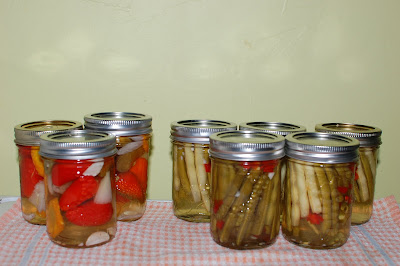 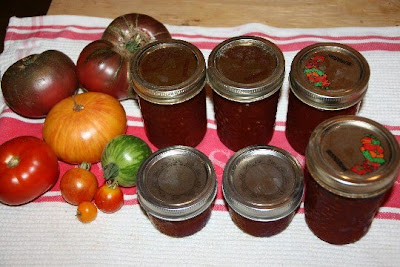 Way back in January when the first CanJam ingredient was citrus, I found a recipe for tomato lemon jam in the Madame Benoit cookbook that looked really interesting. At the time lemons were readily available but the thought of using winter tomatoes wasn't very appealing. But the recipe stuck in the back of my mind as something I wanted to try when tomatoes are at their peak flavour. Well they don't get any more peak than right now!

Madame Benoit's recipe calls for an obscene amount of sugar- 5 lbs sugar to 5 lbs tomatoes! ( I think it may be a misprint.)But Colette found another tomato jam recipe that also called for lemon and a lot less sugar so we used it instead. We also tweaked the spices, adding a few things that weren't originally called for but that we thought would make a great addition. 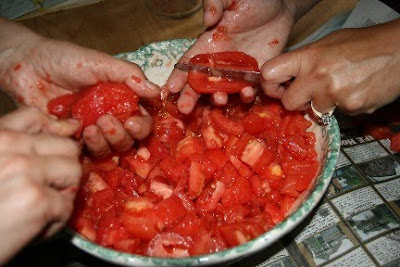 Peel and dice tomatoes. Place in saucepan and bring to a slow boil. Boil uncovered about 20- 30 minutes, stirring often until liquid is reduced.

Add lemon peel and juice, sugar, vinegar and seasonings. We also added 1 bay leaf and a touch of celery seed. Stir and return to boiling for about 40 minutes until thickened. Test on a chilled saucer for gelling. Pour in 250 ml jars - recipe said 4, we got 5 250 and 2 x 125 so perhaps we didn't cook it down as far. It gelled nicely but not too solid which we prefer. 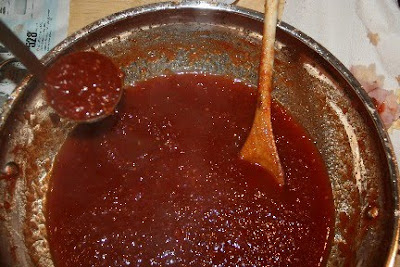 The taste is lovely and piquante. Sweet enough to enjoy as a jam but savoury enough to enjoy with meat or cheese and fantastic with shrimp!
Posted by CallieK at 9:45 PM 1 comment: 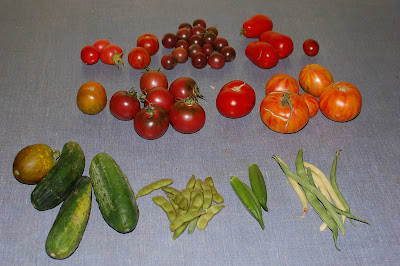 Everything is in full swing around here. The tomatoes are coming in gangbusters and that means non stop salads! I live for these days of walking out on the back deck and picking a rainbow of fresh tomatoes and eating them still warm from the sun. 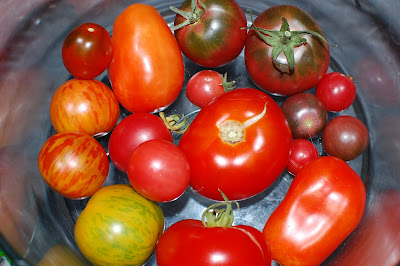 One of our favourite ways to serve fresh tomatoes is a modified caprese salad, using fresh Ontario peaches, along with tomatoes, buffalo mozzarella, and basil. Drizzled with olive oil and a splash of balsamic, the sweet tastes of summer explode in your mouth! 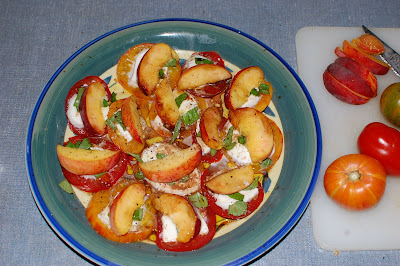 Another popular summer salad is panzanella, or Italian bread salad, using fresh ripe tomatoes, cucumbers, basil and onions from the garden. It's also a good way to use up stale bread. 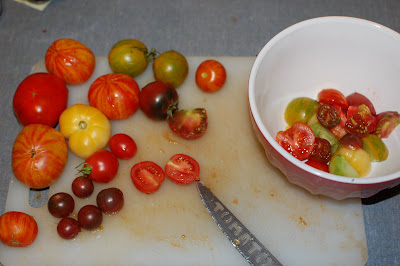 Cut tomatoes in chunks according to size- cherries can be halved, bigger tomatoes in pieces. Place in salad bowl and salt well- this encourages the juices to come out and increase the tomatoes flavour.

Heat 1/3 cup of oil in a frying pan and add garlic. Heat garlic until just starting to brown and removed from oil. I dump the cooked garlic right into the salad bowl but you could put it aside to mix with the dressing.

Allow the oil to heat up till very hot ( if it's smoking it's too hot) Drop in bread chunks and lower heat. Stir chunks rapidly, turning so all sides are lightly brown. Remove from pan and put in salad bowl.

Mix remaining oil and vinegar, salt and pepper to taste and add to salad. Shave cheese on top and mix everything well. Allow to sit for 5- 10 minutes to let bread absorb some of the juices and dressing. 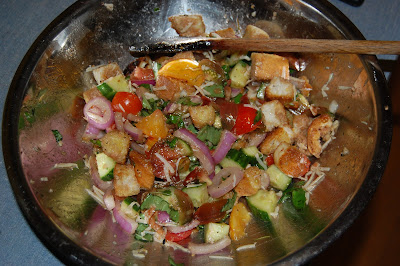 When the Russian and I were first dating, he informed me that he hated tomatoes. He had arrived in Canada after working 10 years on cruise ships so I was pretty sure he'd never actually tasted a ripe tomato. After enjoying them fresh from the vine, he's now converted to tomato love. 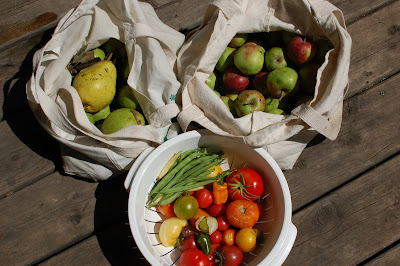 Tomatoes are not the only thing taking over the house these days. An early spring and hot summer has everything ripening about two weeks ahead of schedule so the canning season has also come early. Not far From the Tree has been busy so I have a ton of fruit to process as well. With the kitchen being far too hot to cook in I've adapted the back deck into a makeshift cannery, using the side burner on our propane grill as well as a butane portable burner. The preserve shelves are quickly filling but the mountain of produce doesn't seem to be shrinking! When I'm up to my elbows in sticky fruit and sweat is trickling down my face, I remind myself that soon enough it will be January and the fruits of this labour will make it all worthwhile. 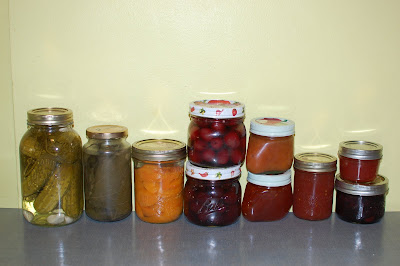 Passing on the Traditions 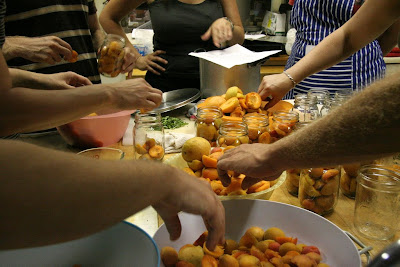 Last week I taught my first canning workshop. I've been sharing what I know about preserving food with friends for years but this was my first ever paid performance and like most things I wanted to make a good impression. The workshops are part of a CSO ( Community Shared Orchard). People purchase shares of the fruit harvest in advance and receive a share every two weeks from the participating farmers. Giving people the option and ability to preserve the fruit helps everyone make use of the harvest at it's peak! The tricky part is that no one, not even the farmers can be sure what will be ready the day the shares are delivered so half the fun is picking out recipes. For the initial workshop we were expecting the last of this year's cherries and some newly ready peaches. Two days before, we were notified that we were receiving 56 lb of apricots, 26 lbs of plums and 14 lbs of blueberries. So much for cherry jam and peach salsa! 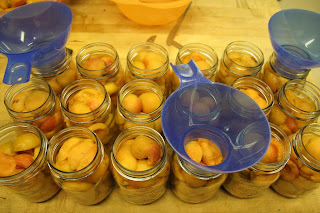 We decided to do apricots in light syrup, slow cook plum jam ( no pectin) and I found a wonderful recipe for Apricot Blueberry jam with basil.
Posted by CallieK at 4:11 PM 3 comments: