Where I'm From- Part One 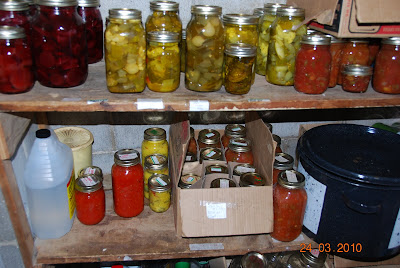 This is my dad's pickle shelf. It's located in the fruit cellar under the cement porch stairs in my parent's home. You won't find any fancy jars or unique ingredients here- just plain old backyard vegetable garden preserves and the odd jam. Dill pickles, bread and butter pickles, mustard pickles, beet pickles, sweet tomato chili sauce- these are the tastes of my childhood, and the techniques I learned while making them are the same ones I use today. When I find myself getting too caught up in trying to make something exotic, or longing over designer jars, I think of this shelf with its plain jars and handwritten labels. I think of the long hot summers of work that go into making these, and how good they taste when we eat them in the dead of winter, and I remember why I do this. Family recipes and traditions passed down from generation to generation; this is my inheritance and my legacy.
Posted by CallieK at 4:33 PM 2 comments:

It Must Be Jelly Because Alliums Don't Shake Like That! CanJam Episode 3 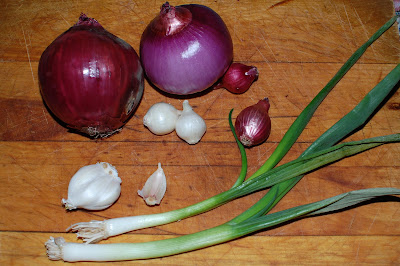 It's CanJam time again and our flavour of the month is alliums! Leeks, onions, garlic, shallots, I love them all! Garlic, however does not love Colette so that one was out. Ramps are a wonderful spring treat but not yet in season here. We both had very hectic schedules this month so we wanted to do something simple, and in keeping with the challenge aspect we decided it was time to do something other than pickles. Neither of us have much experience making jams and jellies other than jalapeno jelly. So when I came across a fairly easy recipe for Red Onion Jelly it seemed like the perfect choice! 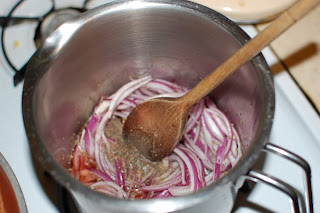 to a full rolling boil and boil exactly 5 minutes, stirring constantly. Remove from heat. Skim off any foam with metal spoon.Ladle quickly into hot, sterilized half pint jars, filling to within 1/8 inch of tops. Wipe jar rims and threads. Cover with lids. Screw bands tightly.
Process in a boiling water bath for 5 Minutes.
Everything went smoothly until we got to the pectin point and realized that the pectin crystals we had were for freezer jam and were no cook! Not being jam experts we were unsure if this would still work with our recipe and even so we didn't have enough. I had some liquid pectin in the cupboard so we used them both and hoped for the best!

The nice thing about making jelly is the immediacy - we were able to see and sample a jar of our concoction as soon as it cooled. The first thing we noticed was the texture; because the onion pieces were left in the consistency was more what I would consider jam, not jelly. Whichever you call it, the taste was sublime- sweet and rich and savoury. We sampled some with old cheddar which was a very tasty combo so we had to pair it with other cheeses. The sage also made me think it would be delicious with turkey sandwiches, or as a glaze for chicken. 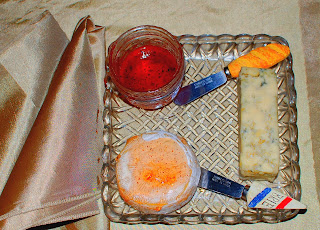 Our knowledge of this type of canning is obviously something we need to work on. The jelly didn't set as firmly as we had hoped- I suspect it was because of the amount of liquid the recipe calls for combined with the liquid pectin. If we were more experienced we probably would have known this and adjusted the amounts, or made sure we had the correct pectin. I would love to try this recipe again and experiment with using other herbs or liquids (red wine in place of apple juice!) but I think we'll have to wait until we've had a bit more practice! 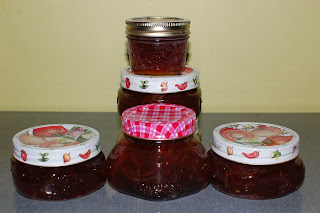 Posted by CallieK at 8:53 AM No comments: 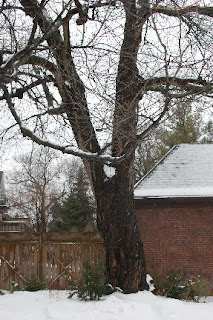 For the last tw

o weeks I've been totally absorbed by We'd Tap That!, the maple syrup project with Not Far From The Tree. We tapped our first tree on Mar 3rd- Colette volunteered her large Norway maple to be our test tree, and for the first few days we had ideal temperatures! Sap needs certain conditions to run- nice and warm in the daytime and below freezing overnight. Colette's tree was a gusher! We were using 2 litre pop bottles as a collection system and the sap was running so freely we were soon scrambling to find containers to pour it in so 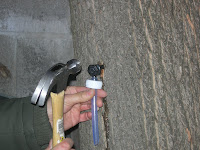 we could freeze it. Over the weekend of Mar 5th we tapped an additional 6 trees in backyards scattered about Toronto and the sap was running strong. I felt a little like the boy with his finger in the dam; as fast as I could distribute empty bottles, tree owners and volunteers were filling them. For a few days everywhere I went I could be seen scrounging in blue bins for food grade containers that could hold a few litres- you can bet a got more than few funny looks as I traveled

by subway with bags full of plastic bottles! We were also running out of freezer space- sap begins to break down after a day or so and we planned on boiling it down all at once so freezing was the only way to keep it fresh.


Then the weather intervened. The lovely warm days here in Toronto last week meant the temperatures didn't drop below freezing overnight. The sap run dwindled to a trickle. Still we managed to come up with 70 litres of beautiful clear sap! 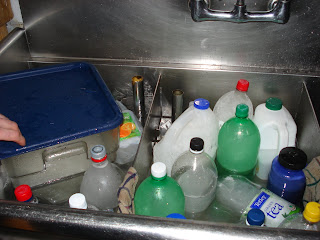 The sap boiling takes a considerable amount of time because of the high water to sugar ratio. Most syrup operations use Sugar maples because the sugar content is the highest, hence the name. We were only tapping Norway Maples because they are the most abundant and healthiest of all urban maples. It takes about 60 litres of Norway sap to produce one litre of syrup. It's a lot of work for only a tiny amount of syrup! Our plan was to boil down the combined sap in a large borrowed evaporator pan over an open fire. We made arrangements with Dufferin Grove Park to use their existing firepit, ordered our firewood, and got our official permit from the city for the Sugaring Off Party on Sunday Mar 14. We planned to have sap and syrup tastings, a pancake breakfast, games and activities for kids and music by an amazing band, Makita Hack and the Log Rollers. The boil down day was scheduled for Saturday, the day before. 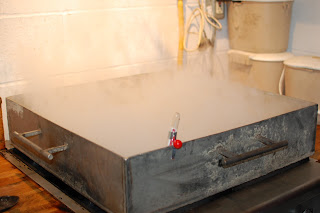 Then the weather thwarted us again. After weeks of sunny days we got hit with rain. A steady downpour for 3 days and if that wasn't enough to put a damper on things, it got windy too. Huge gusts of wind made for near impossible conditions- park rules dictate no open fires when it's windy. Thankfully Dufferin Grove has a wonderful rinkhouse with an industrial kitchen attached to the garage. So on Saturday we moved our operations indoors- the evaporator pan fit snuggly over the gas stove, almost like it was designed that way. With all four burners blazing and the ventilation on high to suck out the steam, we reduced our 70 litres of sap down to about 5 litres of partially finished syrup in record time! 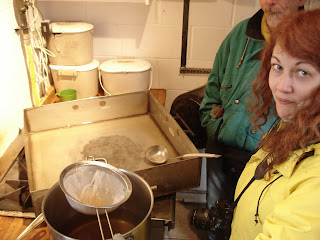 Sunday dawned grey and cold but the winds had died and the rain held off. We opted to move the party 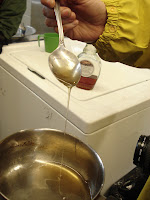 indoors in any case so the garage was converted into a sugar shack, with photos and models of our collection system on display. We had a sampling station for people to taste the fresh sap and partially finished syrup while we continued to cook the remainder. Inside the rinkhouse, there was a roaring fire in the woodstove, and tables and chairs to sit at while enjoying the amazing band! The turnout was fantastic- tons of people stopped by for a sample and many stayed for the whole event. There was a long line for pancake, sausage and maple baked bean breakfast served up by the Parks staff and some of our volunteers in the Zamboni cafe - we even ran out of sausages.

But the crowning glory of the event for me was the final product- a tiny amount of beautiful, light, pure syrup! 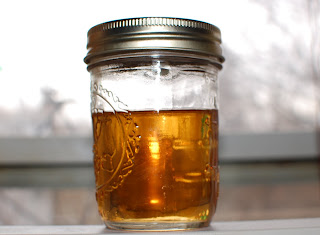 My Quebec ancestors would be proud.
Posted by CallieK at 10:57 AM No comments:

Hot Happenings in the Big Smoke! 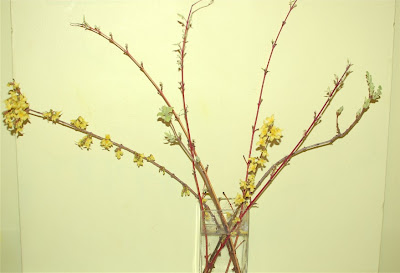 What a week! Between a trip to Montreal (work related), fending off reporters wanting to hear about our Syrup in the City project (more on that later) and watching every minute I could of the Olympics, I managed to get a whole night off! And what better way to spend it than at a book launch for Gayla Trail's new book about gardening- Grow Great Grub! Organic Food from Small Spaces 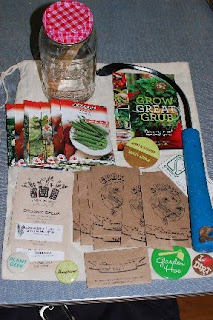 Held at Lula Lounge here in Toronto, the evening was chock full of yummy food from , a slide show of Gayla's stunning garden photos, freebies, door prizes ( I won a bag of goodies!), and even a seed planting station! So wonderful to play in the dirt again- I planted two types of tomato seeds- Cherokee Purple and Black Brandywine which are both new for me. Colette came with of course; we met up with other YGGers and talked garden plans and the CanJam (punctuated by regular updates on the Canada/Russia game by text - gardeners are hockey fans too!). Check out all the swag I came home with! Oh, and the book is lovely too!


We'd Tap That! Maple Syrup in the City has been attracting quite a bit of attention, 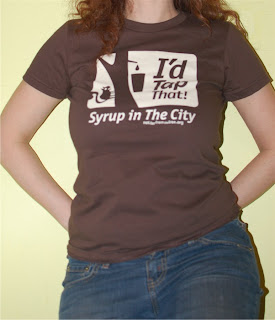 not that it's entirely surprising considering the name and all. The Star ran a last week talking about the project and some of the hurdles we've been dealing with. None the less, the project is still in full swing with tapping getting under way this week! I expect we will be officially announcing the date of our Sugaring Off party any day now ( hint- it's on a Sunday, about two weeks from now, in a west end park!) In the meantime we have the hottest shirts in town ( now that the Olympics are done)and you can get one for a mere $20

Today being March 1, it's St David's Day, the patron saint of Wales, and a perfect day to announce that the CanJam Ingredient for March is Alliums! For those unacquainted with the name, members of allium family include onions, garlic, shallots and, you guessed it - leeks, which just happen to be the symbol of Wales. You got to hand it to the Welsh- England already had the rose, Scotland the thistle, and of course the Irish shamrock, so why not pick something that smells strongly and looks silly pinned to your jacket? Luckily they're delicious and I'm sure we'll be seeing them in some interesting canning recipes later this month!

Spring is fast approaching- can you smell it yet?
Posted by CallieK at 11:58 PM No comments: