Happy Midsummers's Eve
and
Blessings to all! 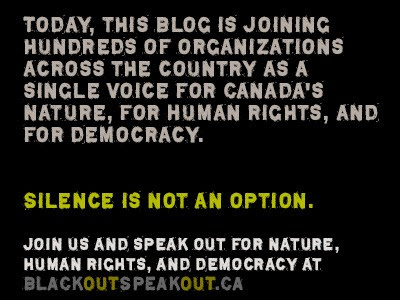 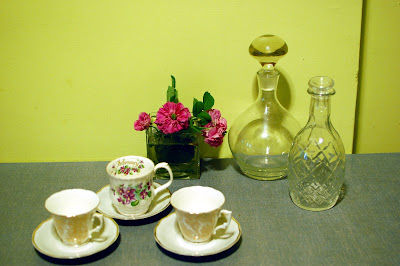 Springtime in Toronto and more than just flowers are popping up: the warmer weather means yard sale season is in full swing and for a frugal shopper like myself, every weekend is like a treasure hunt! Now I am not a hardcore yard sale stalker by any means- I don't scope out ads ahead of time and you definitely won't find me arriving on anyone's doorstep  in the early morning before they've begun to set up. In fact I find the best time to arrive is when things are all but gone and people are anxious to be rid of what's left. At that point, most sellers would rather give things away rather than cart it back in to the house and I often find lovely things that have been over looked by all the early risers. Getting them for free or next to it is an added  bonus.

Yesterday was a particularly good day for free stuff- the lovely things pictured above are only a few of the items that were left on the curb for the taking. The tea cups are a bit of luxury item but I couldn't resist them since I have a lovely gold leaf tea service (a yard sale find from last year). I'm partial to decanters as well and they are a bit more useful; they make lovely vessels for keeping homemade vinegar in. 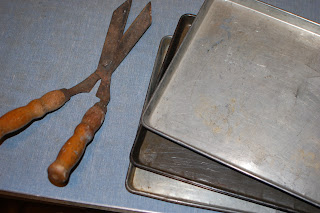 Also from the free pile I found these lovely hedge clippers and three large baking trays, all of which will clean up nicely. 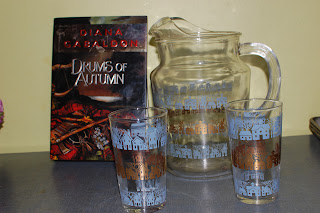 I almost didn't take this glass pitcher (because I have a few already) but I decided the pattern was too cool not to. Then I stopped at my favourite vintage store to drop off some clothes and there were two glasses with the exact same pattern! Kismet! I used some of my store credit to get them, and the book- it's the only one in the series I didn't have. The vintage shop sells my stuff on consignment and I usually end up find things in the store I like in lieu of cash. The cast iron frying pan is a replacement for the one that cracked and I like the wooden handle. The coffee perculator doesn't require electricity and can also double as a kettle. 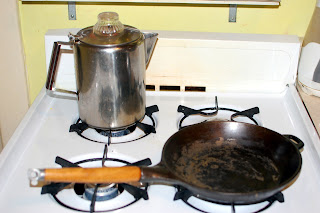 But I think the best recent find of all was this practically new wool blanket that I picked up for a mere $5. 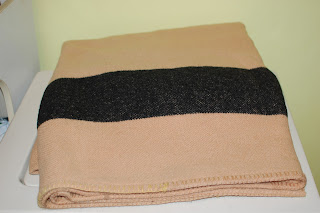 All these things made today the perfect day to enjoy some freshly baked scones with tea and homemade rhubarb preserves, while watching the Queen's Diamond Jubilee festivities. 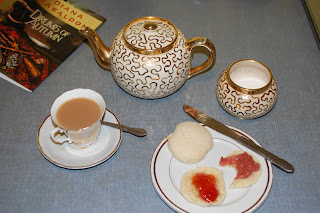 I think I may be turning into my grandmother.
Posted by CallieK at 10:30 PM No comments:

Rain on the Roses 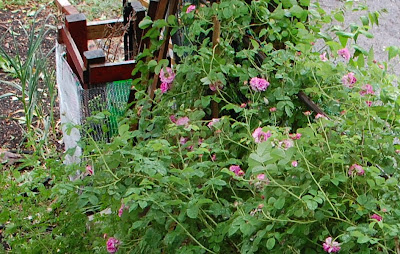 June came in like a lion today- the much anticipated rain is coming down in buckets, accompanied by gale force winds!

It's a bit like Pooh's Blustery day but oh did we need it! The garden was dry as bone, and the rainbarrel has been empty for weeks. I caved in and hooked up the hose to kitchen sink a few days ago but even that didn't do much more than settle the dust. I've  been reluctant to transplant most of the seedlings- the leeks and beets went in last week and are hanging on but only just. The strawberry spinach vanished in a day- whether if got eaten or just evaporated I'm not sure but there's no trace of them now. I even held off on direct sowing my beans for a while, hoping for a good rain- they eventually went in to the ground the day I watered and are all up now thankfully. I've got some zucchinis, squash and brussel sprouts on the deck still in their seedling pots- they will be grateful to be finally transplanted in the ground now that it's rained. It's not the bounty I was expecting by this time but lettuces are ready to pick and yesterday I harvested rapini and garlic scapes to make our first garden meal of the year, in time for my June 1st prediction! 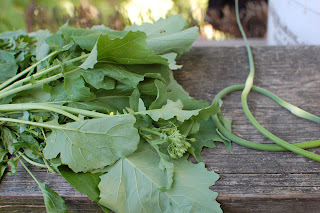 The rest of the garden is still rather bare for this time of the year; for someone who was so anxious to get going earlier this year I've been surprisingly slow to plant, for a variety of reasons. Some things in the works have had me stalling but if all goes as planned there will be a much different strategy this year. In the previous post I wrote about how my garden space has grown over the years but what I didn't mention was how much the surrounding trees have also grown. For while I was able to trim back branches to allow a decent amount of sun to get through but each year it's gotten more difficult and the overhead canopy has gotten more dense. Last year the tomatoes in  the ground barely ripened at all. In previous years I have taken advantage of the roof next door as well as some key sunny spots of our deck to grow a few tomatoes in containers. Well we now have neighbours next door so that space is gone, and our deck see less sun each year due to the same shade trees. The only solution is to go up! 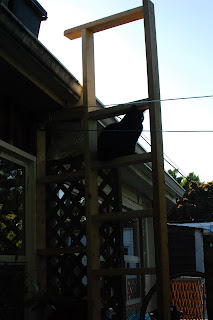 Our building has a flat black tar roof, ideal for growing heat loving plants but we didn't have a way up there. We considered using a regular 6' ladder but that seem precarious at best. So the Russian and I put our brains together and came up with a solution that is hopefully going to allow me to grow all my tomatoes and peppers up there, as well as few other things in containers. It's not quite finished but it holds my weight and feels stable enough to climb. The farmcats seem to like too. I still need to figure out how to transport or collect water up there but hopefully I'll have an update from the new rooftop garden in the near future!


My other big news I've been planning to post about has to do with work- there's been some wonderful developments in my job description that have me actually excited to go to work lately.  I've been assigned as the steward of our somewhat neglected greenhouse space so I've been very busy cleaning it up and making plans to let it live up to it's potential. As well I've been able to include some general improvements to FoodShare's outdoor space as a whole; adding things like rainbarrels and rain chains as well as new garden beds and plants. There's been so much to do and I promise I will do a full review, complete with photos very soon.