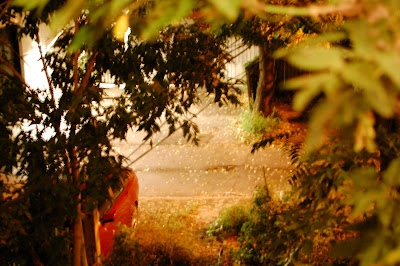 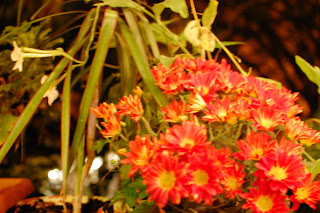 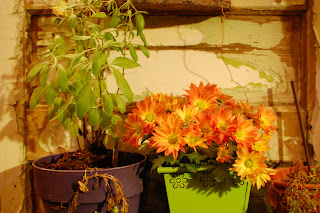 ...and the farm cats are happy to become house cats again. 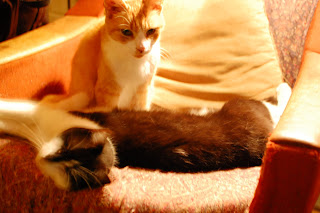 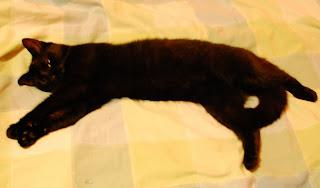 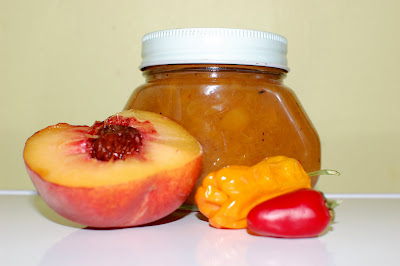 Every month it seems like the Canjam posting deadline comes faster! Maybe it's because I've been so busy canning everything else. I feel a bit like a squirrel this time of year- Winter is coming! Must save food!

September's pick for the CanJam was stone fruit which includes peaches, nectarines, apricots, plums and cherries. Colette and I did cherries in June, I've done plums and apricots in July and both peaches and nectarines in Aug - this crazy hot summer made everything ripen so early! But one of the most appealing things about the CanJam is that it's challenged us to work with new ingredients and recipes and we've both learned so much! So for Sept we decided that our goal was to try to create something entirely local. We didn't put a specific distance factor to it but homegrown was first choice where possible and locally farmed/grown was next. 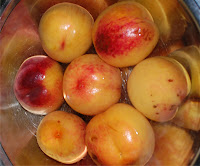 We started with peaches- I wasn't able to pick any myself this year but at our local Farmer's Market I was able to get peaches from Two Century Farm who are near Grimsby, not far from where I spent last weekend. Two Century is so named because the land has been farmed by the same family since 1788! Beginning with John Smith who arrived from the US in 1787, right up to Duncan Smith the current owner, the Smith family has been farming that land for over 200 years. I wonder if they are related to Henry ( Smith) of Pelham and if they followed the black walnut trail as well?( see previous post). 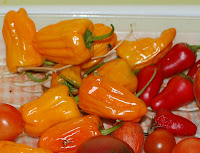 We wanted a spicy jam so we used hot peppers that I grew on the roof- a mix of red and green jalapenos and one golden habanero. We charred the peppers over a flame to remove the skins and intensify the flavours; another time I'd love to try smoking them instead.

For sweetener we used the last of the maple syrup we made back in March using sap from Colette's maple tree see . And for pectin we used the apple pectin I made earlier this summer from green apples, thanks to Tigress for the directions! We made just a small batch as a tester and we're pretty pleased with the results!

med- low heat until soft. Use a potato masher or immersion blender to mash peaches until blended. Add maple syrup and cook mixture on low for 5 -10 minutes until well blended and starting to thicken. Turn heat to high and add lemon juice and pectin. Bring to a boil and boil for one minute. Pour in sterilized jars and process for 10 minutes in a hot water bath.


The jam is lovely and peachy with a nice afterburn. We omitted the lemon juice step ( no such thing as local lemons! ) so our jam didn't really set but it has a nice thick texture, with chunk of peaches so I actually like it better that way. And we can proudly say it's truly local!
Posted by CallieK at 8:50 AM 1 comment:

Days of Wine and Walnuts 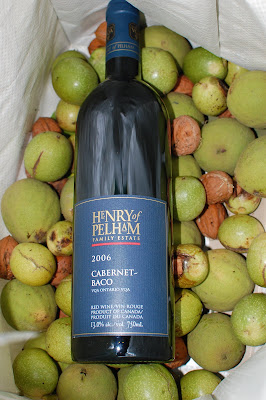 This past weekend I volunteered with the Tour de Green Belt, a biking and local food adventure tour through the greenbelt of Ontario. There are 4 different tours showcasing different regions- two were held in the Niagara/St Catharine's area this past weekend. The Niagara region is mainly known for vineyards and orchards so it was fitting that our home base was Henry of Pelham's. My original plan was to ride one of the tours but somehow I didn't get organized to bring my bike so I spent both days helping out at main event. Which worked out fantastic as I found plenty to see and do without ever leaving the winery!

Henry of Pelham Estates is currently owned and operated by three brothers, Matthew, Paul and Daniel Speck. Their father Paul Speck was a descendant of the original settlers of the property, Nathaniel Smith and family who were awarded the deed to the land in 1794. Henry Smith, the youngest of the 7 sons used his portion of the property to build an inn and tavern which operated under many names until the existing buildings were purchased by the Speck family in the mid 1980's. The Smith family burial plot is still located on the property and

now carefully preserved as a monument to Loyalist settlers. There's even a plaque commemorating Nathaniel's history as a member of Butler's Rangers, who fought on the side of the British in the American Revolution.


Surrounding the burial plot are a 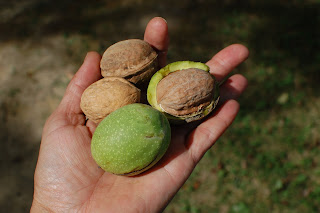 number of ancient fruit trees; in the midst of these I was surprised to find an English walnut tree! From Daniel, the youngest of the Speck brothers, I learned that this particular tree had been planted in memory of their father who passed away in 1992. It's now a full sized tree producing buckets of walnuts which Daniel graciously allowed me to pick!

Daniel who is a wealth of knowledge of the region explained that the surrounding area is heavily populated with black walnut trees and part of the Black Walnut Trail. The earliest settlers, mainly Loyalists and German Mennonites who left the States during the Revolution learned to recognize the black walnuts as excellent indicators of the type of land they wished to settle on From the Grand River Trails Association site:

The pioneers followed the "Trail of the Black Walnut" which clearly stand out in the fall when leaves have been dropped and its fruit is clearly exposed . It indicated a deep, rich, moisture-holding soil, light enough to be easily penetrated by its taproot and hence easily tilled by the would-be farmer. The trunks of such trees have good lumber. It became the source of the well-known furniture industry of the region.

Daniel also led a Dirty Hands bike tour on both days which were designed for families with young children. We toured the vineyards, tasting different grape varietals and the end re

sults: wine for the parents, grape

juice for the kids! We saw the weather station and learned how technology helps them produce the best crops without harming the environment. The vines are not irrigated so they are dependent on the water table; Daniel described how they are using old school methods like weeping tiles and layers of wood chips to help clean the water of excess phosphates. They've also invested in and designed netting that protects their grapes from being nibbled on, but still allows local wildlife to use the vineyards as corridors between the wooded areas that surround the fields. It's easy to see why Henry of Pelham was the first vineyard in Ontario to be Local Food Plus (LFP) certified. 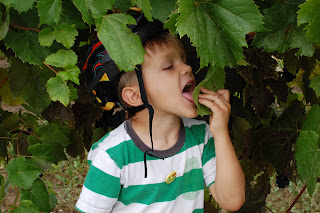 Back at the main camp, participants were treated to a barbecue lunch featuring local produce- amazingly sweet bi colour corn ( bushels of which were shucked by the volunteers), a delicious pasta salad loaded with local veggies, and from the grill, hot dogs and burgers topped with local onions, lettuce and field tomatoes. For dessert there were baskets of fresh from the tree pears,

apples and peaches. There was even a farmer's market where you could buy Coronation grapes, more juicy peaches, and nine varieties of apples including some you won't find at the supermarket like Golden Ginger and Paula Red.

After lunch I was able to slip away and do some exploring on my own and in a near by wooded area I found the black walnuts. Just as suggested they were easy to find; the leaves have already begun to turn brown and fall but the walnuts hung in large clusters looking remarkably like limes. 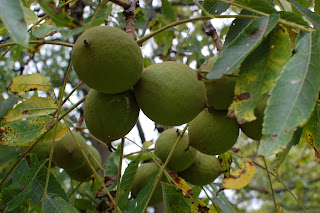 I was able to pick about two dozen staining my hands in the process. I brought them home along with the English walnuts and a bottle of Cabernet-Baco from the wine store on site. The walnuts will quickly get eaten and used in preserves, the wine will likely be sipped over a meal sooner than later but the memories of two days in the Niagara fields will stay with me for a long while.

For info on upcoming Tour de Greenbelt events, check out:

I'll be there, this time with my pretty pink bike !

Posted by CallieK at 9:18 PM No comments: