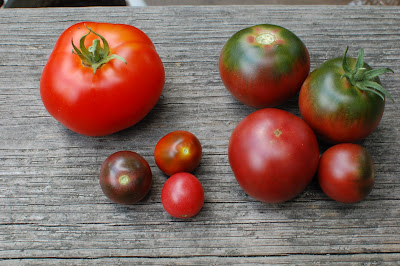 The black tomatoes are the clear winners this year but almost all my tomatoes are going to be ready this week!

I have these too 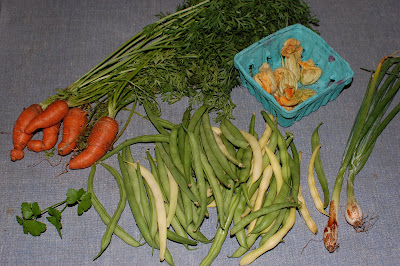 The carrots and onions are from a community garden I helped plant. The beans , parsley and squash blossom are from the backyard and the tomatoes are from the roofgarden
Posted by CallieK at 9:37 AM No comments: 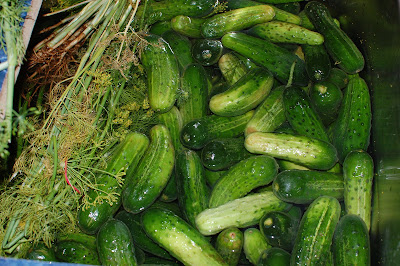 Can you believe we're more than half way through the CanJam challenge already? When I read about Tigress's plan for a year long canning challenge back in December, the very first thing I thought of was my dad's dill pickle recipe. My dad's dills are legendary and a staple of my childhood. They were also the first pickles I ever made on my own and I have shared this recipe and the canning techniques I learned with it, with a number of my friends over the years. When Colette and I were roommates many years ago I turned her on to my dad's dills and she's been a convert ever since. Every Sept we watch for the price on pickling cucumbers to drop significantly- our ideal is $.39/lb but some years they never get that low. We buy about a bushel, as well as large bunches of dill and garlic and have a marathon pickling session! Every year we think we've made enough to get us through till next year and every year we have eaten them all by spring- they are just too good! 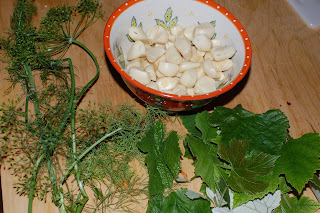 Over the years we have experimented with small variations of my dad's original recipe- we usually do a few jars with hot peppers added for some spicy pickles, and Colette uses less garlic in her jars because of her garlic allergy. Our latest variation is to add a single grape leaf to each jar- the tannins make for a very crisp pickle without changing the taste in any way. But the basic recipe has remained unchanged for decades and everyone that eats them considers them the best pickles they've ever had. Even tho we know the recipe pretty much by heart we usually call my dad when making them to 'double check' the recipe- this was a tradition begun in our early days as novice canners and now it's become a way to let my dad know we are thinking of him when we make them. 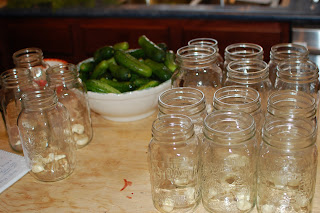 water for min of 3 hours. Wash and sterilize 4 or 5 quart jars. Heat snap lids to just boiling and turn off heat. In a large non reactive pot heat water, vinegar and salt till boiling. 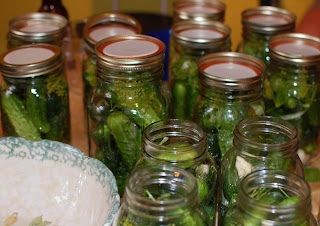 Add one dill flowerhead and 2-3 cloves of garlic to each sterilized jar. Stuff each jar with as many cukes as will fit, leaving 1/2" head space. You can cut cukes to fit but they tend to be less crisp so we try to avoid this when possible. Add one grape leave, another dill flower and more garlic if there's room and stuff in the spaces between cukes. 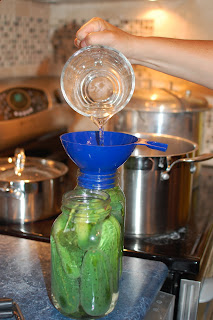 Pour brine mixture over cukes, leaving headspace as above. Fit snap lids finger tight and process immediately for 10 minutes. Allow jars to sit for min 3 weeks before opening. (We usually make triple or more of this recipe.- in larger quantities we sometimes use salt to taste- as long at the vinegar to water ratio remains the same, the amount of salt can be used as a guideline and adjusted more or less dependent on your tastes)

This is the earliest we've ever made dills but the weather has been so cooperative this year that pickling cukes appeared at the markets at least month early and the price has already started to drop. As well my dillweed was almost 5' tall and about to seed so the cucurbit CanJam came at the perfect time! We will still do the bulk of our dill pickles later this summer but it is a wonderfull treat to have a batch of early summer dills almost ready to crack open! 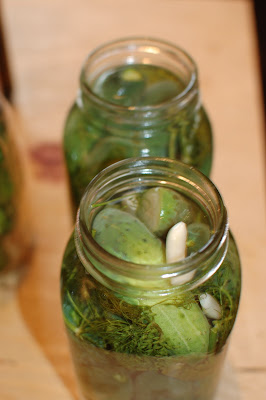 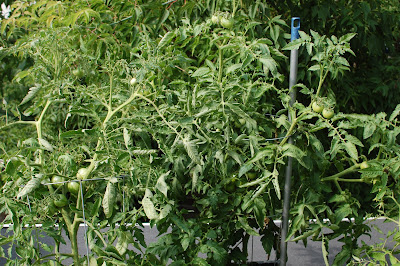 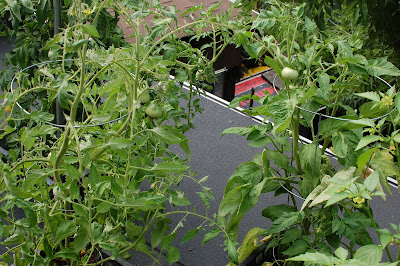 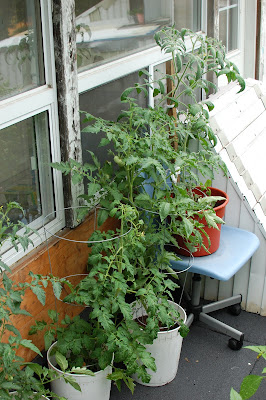 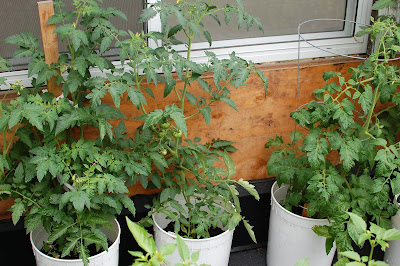 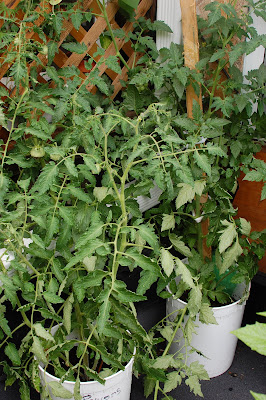 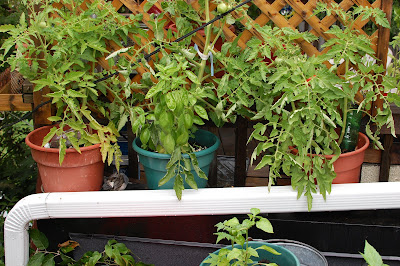 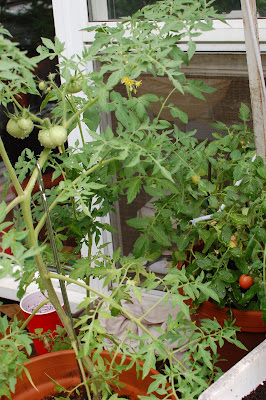 Tomatoes like company so there's a few more plants:

My first Red Bell Pepper is 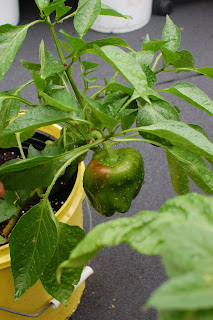 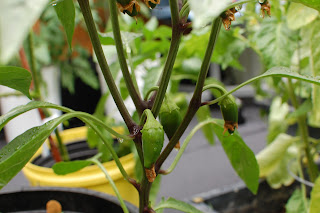 The jalapenos are just beginning to appear. 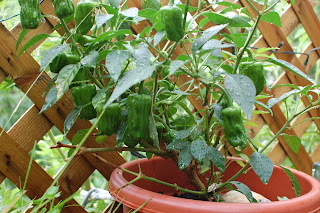 A bumper crop of habanero peppers again this year! 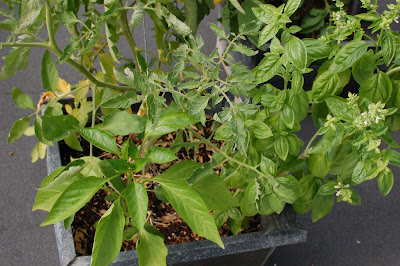 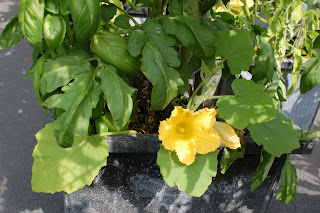 Even a stowaway cucurbit, species unknown, a gift from the compost!

Everything's thriving up on the roof!
Posted by CallieK at 10:36 PM 3 comments:

Bring on the Bounty! 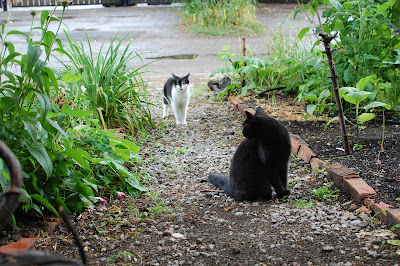 When we finally got home from Sarnia the gardens had exploded! We were blessed with near perfect weather while were away but here in Toronto it rained almost everyday which was great for the veggies. Everything was lush and well ahead of seasonal from all the earlier heat and thanks to the rain I didn't lose a single plant even though we were gone for over a week.

Since we've been back I've been harvesting almost every day. The Ditmarsher cherry tomatoes are the first tomatoes this year as expected- tiny pinky red globes of goodness! 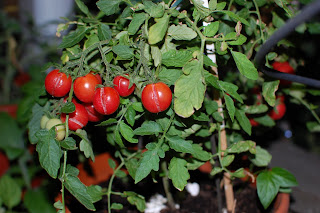 but my Sasha's Altai, a Russian heirloom is right behind- early ripener indeed! 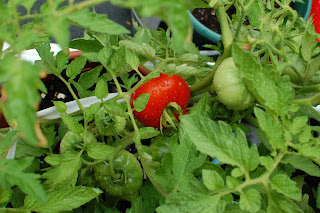 I also harvested the last of the peas, strawberries and rhubarb. A few lettuces are still handling the heat, hidden in the shadow of the tomatoes. 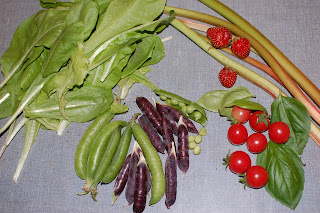 The herbs are fantastic- I cut some dill this week to use in our CanJam project ( more on that later this month) and it was almost 5 ft tall!

Right now the cukes are flowering like mad and I have a few tiny pickles-in-waiting! But the winner this week is the green beans- bushels of them! I've been harvesting them everyday and we've eaten them in various ways. 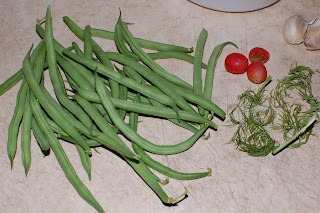 This bunch was delicious served cold as fasolakia lemonata- a Greek dish I love on a hot day. This recipe is adapted from Christine Cushing-she uses chopped red pepper in hers but I prefer tomatoes- the cherry tomatoes work well and ripen at the same time as the beans.

Let flavours mingle for at least an hour. Serve cold.

There's tons more beans to come and I'll be doing sweet pickled beans and dilly beans as soon as the kitchen cools down a bit.