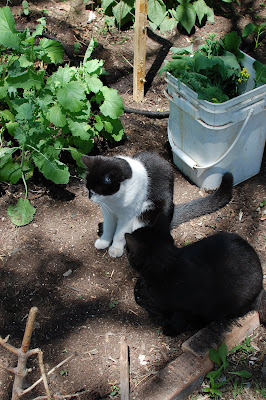 It's been a heat wave here in Toronto for the last week and the garden has exploded!

Beans that I direct sowed a week ago are up and now the same size as the ones I started in seed trays a month ago. 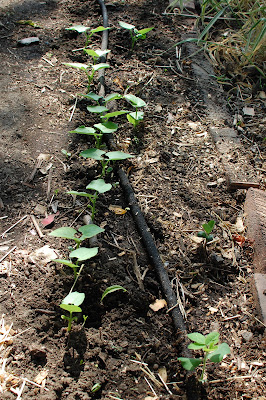 The rapini grew about 5 inches in as many days and I have been rushing to harvest it all before it flowers. 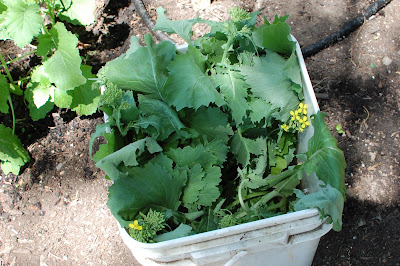 We've been eating lettuces every day! So lovely to eat from the garden again and so early this year! 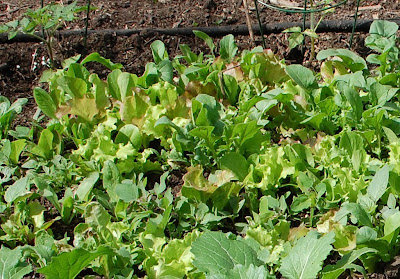 The hot weather makes it feel like I'm so far behind. I built a trellis for the cukes last week and the seedlings are in the ground. 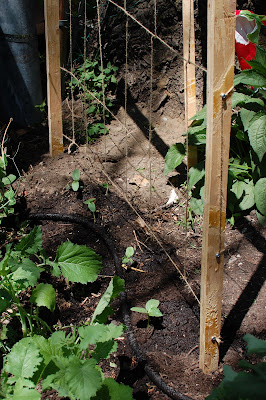 The potato bucket is all set up and I've had to add my first layer of soil on top of the sprouting seed potatoes. I planted two types this year: purple and banana fingerlings. With a Russian around there's no such thing as too many potatoes so I hope they both do well. 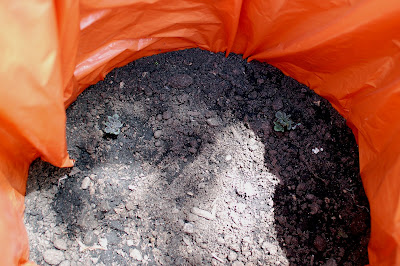 My fingernails are permanently ingrained with dirt and the bottom of my feet are perpetually black but I couldn't be happier !
Posted by CallieK at 10:09 AM No comments: 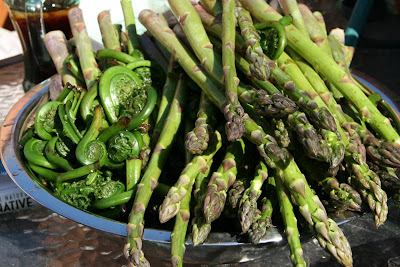 It's May in Ontario and most of the local fruit and vegetables are still a few months away. But May brings its own delights that we eagerly anticipate every year! The first local crops to appear are rhubarb and asparagus but in recent years a number of wild foraged morsels are also readily available, including fiddleheads, ramps and morels. I haven't had any morels yet this year but I've been stuffing myself with fiddleheads and I'm anxiously awaiting a jar of ramp pesto that a friend makes every year.

In keeping with this, Colette and I decided to incorporate one of these in our choice of CanJam projects this month. We've made pickled asparagus before but not fiddleheads and there are some lovely recipes for both that are pretty much interchangeable. With that in mind we created one of our own, using the quantities of a proven pickled asparagus recipe and adjusting the seasonings to suit both.

1.Place several slices of onion in the bottom of 4 large jars.
2. Place a layer of fiddleheads ( 6-10 fiddleheads)
3. Trim the asparagus to fit in the jars; pack them in with the
cut-end facing down.
4.Combine the remaining ingredients in a saucepan, and boil over
moderate heat for 10 minutes.
5. Pour into the jars, leaving 1/2-inch head space.
6.Seal the jars according to the manufacturer's directions; process
for 20 minutes in boiling water bath.

Use only the freshest local asparagus for this!
We soaked both the asparagus and fiddleheads in a tub of water for about 30 minutes before pickling to remove any grit and bits of paper. We snapped the asparagus ends to remove the woody stalk but still found them too long for our jars so trimmed them as needed. Rather than waste the trimmed bits we stuffed them in the middle of the jars as well. 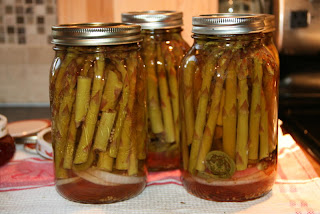 We won't be tasting these for a few weeks but we'll be occupied with all of the fresh stuff around right now. The jars will be happily waiting for us when we crave a bit of spring and I can't wait to try a pickled fiddlehead in my martini!

The other CanJam choice this month was rhubarb and it's getting star treatment for another purpose!Tomorrow -May 20 - is Not Far From the Tree's Gleaning Screening- a fundraising event to celebrate another gleaning season and to raise much needed funds for our upcoming season. 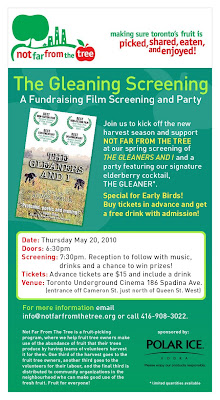 My skills have been put to work on the bar and I have managed to secure some generous donations of alcohol to help make it a festive evening for all. Our signature drink The Gleaner is a vodka cocktail made with elderberry syrup we made last fall but I also wanted a spring drink to serve! One of our volunteers provide me with a huge bag of freshly picked rhubarb and I cooked it up to make a lovely rhubarb cordial which I will be serving at out party( with or without vodka!)

16 cups of rhubarb, cut into small pieces
2-4 cups of sugar - I kept mine tart!
1 cup of water ( if you have time you can add the sugar to the rhubarb in a bowl beforehand and juice will release so you don't need to add water. I was in a hurry!)


Wash and trim the rhubarb. Discard all leaves - they are poisonous.

Cut stalks into 1/2 inch pieces. Add all ingredients to a large stockpot and bring to boiling. Turn heat down and allow to simmer until rhubarb is soft and breaking apart. Remove from heat and allow to cool slightly before straining. (I saved the strained rhubarb and froze it to use later.) Place strained juice back into the pot and bring to a boil again. Simmer for 5 minutes- taste for sweetness and add more sugar at this point if it's too tart! You can cook it until the consistency is to your liking- the longer you cook the more syrupy it gets! Pout hot liquid in jars, with 1/2 inch head space. Process in a hot water bath for 15 minutes for pint or quart size jars.


If you are in the Toronto area, come to The Gleaning Screening tomorrow night and I will make you a rhubarb cocktail- Spring in a Glass!
Posted by CallieK at 9:33 AM 3 comments:

This past Saturday was both the Horticultural Society of Parkdale and Toronto's annual plant sale and the You Grow Girl plant swap. My intentions were good- I had my eye on a couple plants from the Hort sale and had arranged with the YGGers to swap a few of my extras for a few things I was missing. I did not intend on coming home with 20 more tomato plants, but somehow I did...

On top of that, we are having unseasonably cool weather- we saw snow yesterday and a frost warning last night. So all of my fragile tomatoes who had been happily living outdoors for weeks had to be brought back inside. This is what 50+ tomato plants ( plus a few friends) looks like inside.

For those of you keeping count, that's 11 on the windowsill, 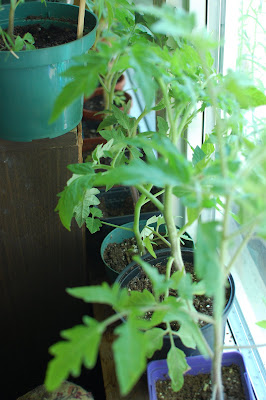 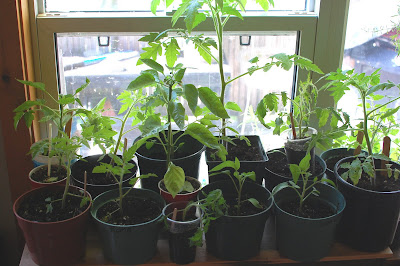 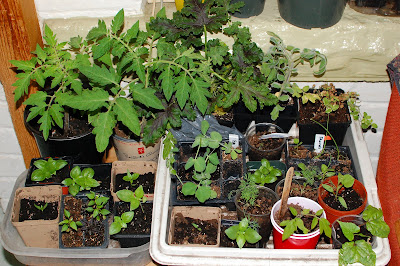 13 on the kitchen windowsill 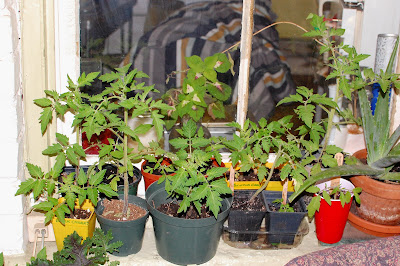 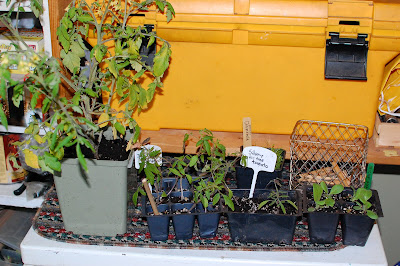 and one on the shelf 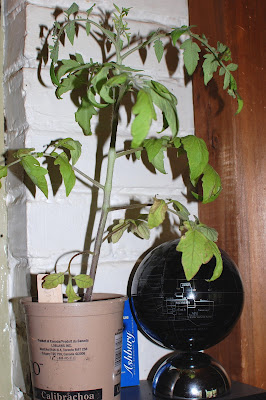 Won't it be nice when they look like this? 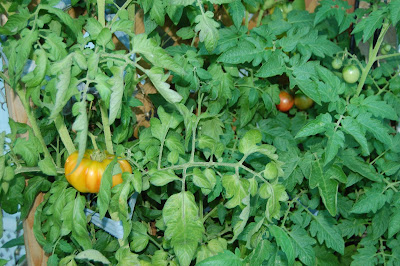 Posted by CallieK at 9:15 AM No comments:

The Merry, Merry Month of May! 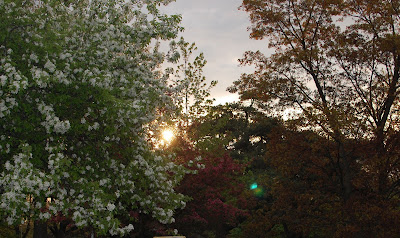 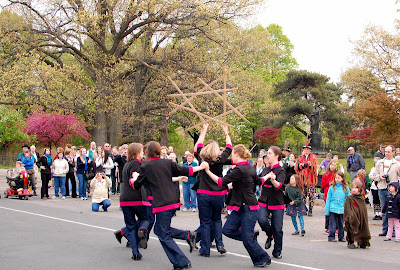 It's finally May! May 1, Mayday, Beltane, what ever you call, it is one of my favourite days of the year. We have an annual ritual among some of my friends to gather before dawn and head to High Park where we join a group of oddly dressed people singing, dancing and cavorting as the sun comes up. Some of my friends actually take part in the traditional Morris dances; I am content to stand on the sidelines , nursing a glass of spiked orange juice and shivering in the predawn chill. 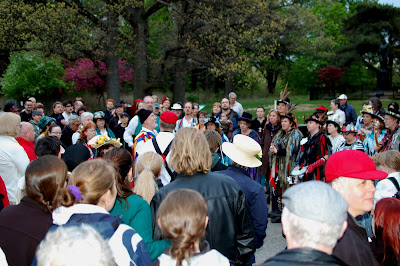 Traditionally Mayday is the mid point between the vernal equinox and the summer solstice, and a celebration of a new growing season. Most of the rituals surrounding it are meant to ensure fertility- mostly of crops and animals! For me personally it's become a welcoming ceremony of another gardening season. Waking up at 5am ( or staying up all night some years!)and walking over to High Park reminds me that the days are getting longer and allows me to see my neighbourhood without the distractions of traffic and people. Dancing and singing with group of kindred spirits as the sun rises brings me joy. But best of all I know that the growing season is finally here and I will be eating straight from the dirt very soon! 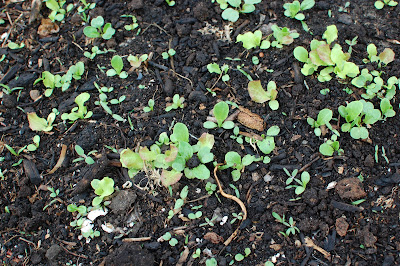 Speaking of gardens, mine are coming along nicely! The lettuces, rapini and peas are looking good in ground and I've been nibbling here and there as I thin the seedlings. I've picked a few stalks of rhubarb, the strawberries are blooming and we've been eating spring onions frequently. Still to come are the beans, edemame, squash and cukes. 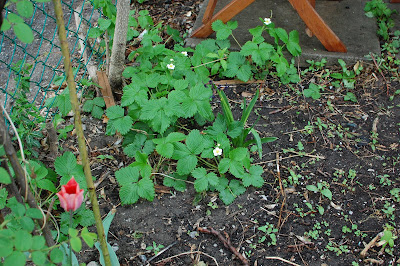 Up on the deck the tomato seedlings are taking over-there's over 40 of them and most are in transitional pots now, waiting to be planted in large containers to be grown on the roof. Last frost date is May 9 this year but that's never a certainty so the tomatoes must remain portable for a few more weeks in case of a late cold snap. The sunporch is still the back-up plan in that case and it's tricky to fit in 40 or so small pots ( and a seedling tray)if the weather turns nasty. 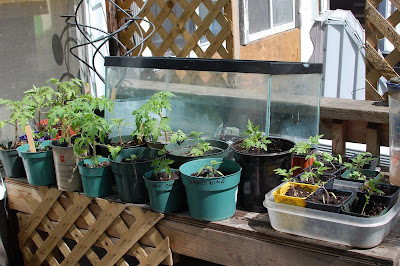 The herbs are growing full force now and I've been able to steal snippings to cook with already. The peppers and eggplants are lagging a bit but if we get the summer we've been predicted I think they will be fine- they do love heat! 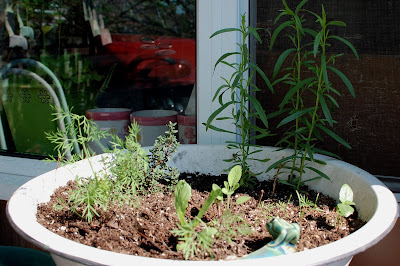 I've still got lots of work to do to get up to speed- haven't planted a single flower yet but I have some seeded. The deck is still a mess as it's more of a planting station than a place to hang out currently. And that is the best thing about the first of May - I've still got lots of time!
Posted by CallieK at 9:39 AM No comments: