Home is where the compost is- Where I'm From part 2 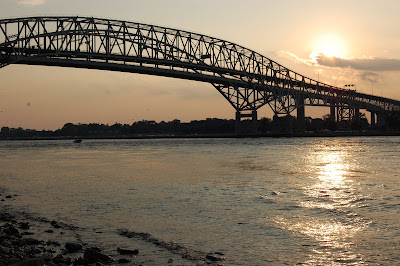 For the last week we've been in my birthtown of Sarnia- the Russian had a week off and my mom is recovering from major surgery so we've been camped out at my friend's beach house on the shores of Lake Huron. My parents still live in the house I grew up in, less than 5 minutes walk from the beach we are currently hanging at so I've been able to wander over everyday to spend time with mom and still have plenty of down time on the beach. It's been my kinda weather, steamy hot sunny days punctuated by great thunderstorms that roll across the lake. Nights are peaceful here with the exception of the mosquitoes who seem exceptionally blood thirsty this year. It all seems so picture perfect on the surface but the reality of life here gets me stressed out in a way I never feel in the big city.

I've always had a love/hate relationship with Sarnia. Most of my immediate family resides here and I was born here so in that sense it's "home" but in my heart I've never really felt that way. Being born in always felt more like a geographical accident. My parents were not from here; like many people my parents' age, my father took a job where he was offered one and my mother followed him here. Whither thou goest and all that .... Forty some years later they are still here- having raised a large family, now happy to be close to the grandkids, they find large cities frightening and have no plans to leave.

Both of my parents were technically 'big city folk'. Born and raised in , my mom spent much of her childhood in the small Laurentian town of surrounded by multitudes of relatives. My father was born in but his family moved around frequently, eventually landing in where he went to university to be come a teacher, and met and married my mom. My earliest memories are full of traveling- train trips to , car rides up winding mountain roads, and a blur of relatives, many who spoke more French than English. In there was only us- there's no family history here, no graves to tend, no grandparent's house to visit, no stories other than the ones I was part of. was a great place to grow up in but a bit isolated and I was out the door and on to brighter lights as soon as I was old enough.

Whenever I come back to visit, I am struck by how much I take for granted living in a big city. Sarnia has similarities to many small Ontario towns- a virtually empty downtown core (even tho it's beautifully situated right on the water) and an ever expanding culture of big box stores on the outskirts. One the things that I used to appreciated most about Sarnia is slowly falling by the way side as well. The proximity to actual farm land used to mean local produce was readily available, even in the chain supermarkets. This week I happened upon the grand opening of the new SunRipe store ( a boutiques style produce chain) and was horrified to find only imported and picture perfect produce available at horrendous prices. Local strawberries growing less than 5 k away were no where to be found but the giant flavourless ones from California were front and centre in their pristine plastic boxes. Meanwhile the farms are being turned into cookie cutter housing, with no trees, and huge lawns to water and keep weed free with pesticides - no ban exists here.

Other things I take for granted like Toronto's multiple bin recycling system are a foreign concept here as well. The blue bins here take very little- cans and glass primarily but most plastics are still not recycled - even more disturbing when you realize that many of the petroleum based plastic polymers are produced right here in Chemical Valley. Yet plastic bags are still given away freely at every shopping establishment. Green bins for organic waste are non existent. Thankfully I learned to compost from my parents long before the city of Toronto got on board and my dad still has 4 or 5 composters scattered around the yard even tho there are only 3 people living in the family home theses days. Even leaf composting and yard waste pickup is controversial here. I spoke with someone who works for the company that holds the waste pick up contract with the city and his opinion is that it isn't worth it. He stated that the city couldn't pay them enough to collect it and they couldn't afford to do it for free. This was while he sat there admiring his new work vehicle- a Hummer, one of two the company owns and his second vehicle- his first is a BMW.

To my friends and family here I probably come across as a big city elitist but it's difficult to stay mum about what seems painfully obvious. Even basic things like transportation here are so frustrating to me. As someone who doesn't drive I find it incredibly difficult to get around and people here find it strange that neither the Russian nor I have a drivers license, let alone a car. Everyone drives everywhere here- the public transit system is so badly designed it's practically useless and bicycles are for leisure not transportation. The most frightening outcome of this is how many people I know here drink and drive routinely!

As I write this, Toronto is cleaning up from the G20 and the protests gone bad. The news reports have been depressing and I'm glad I missed all that - ironically because the two remaining daily trains from Sarnia to Toronto were cancelled this weekend because of the potential security threat. Toronto may be hectic and crowded and I'll likely never be able to afford to buy a house there but I miss my tiny garden, street cars at the door, and my green bin. I can't wait to be home. 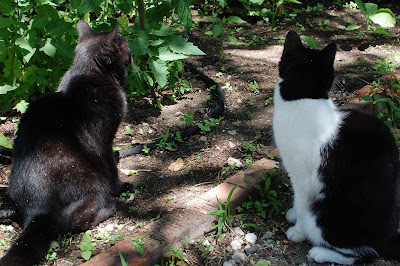 The garden is busy doing that growing thing. These days I'm in it as much as possible and the cats seem to like hanging out there too. Since they seem to want to be in every picture as well, here are my latest garden updates complete with furry guardians.

Shelby in the soybeans 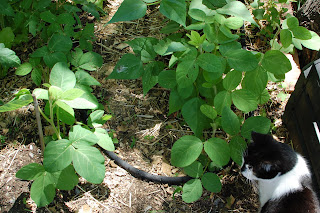 Shadow catching bugs by the tomatillos- sadly she doesn't differentiate between pests and pollinators. 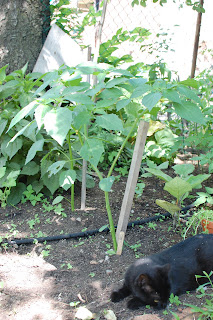 Pickling cukes making their way up the trellis- future dills! 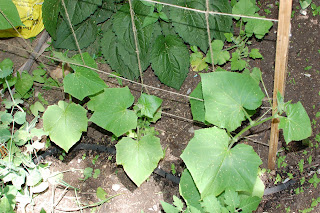 The potatoes seem to like growing in a pail! 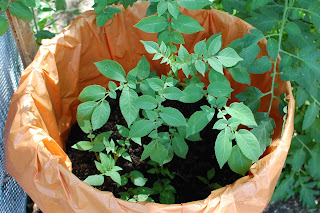 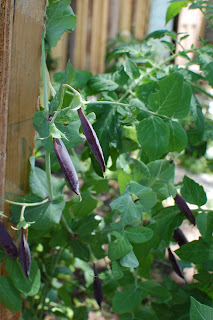 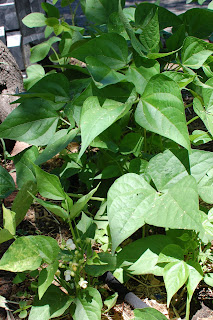 Shelby on her favourite perch atop the fencepost 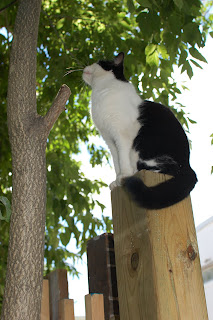 Shadow loves the sedge hedge- Now you see her... 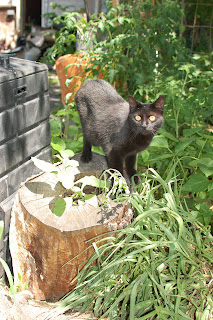 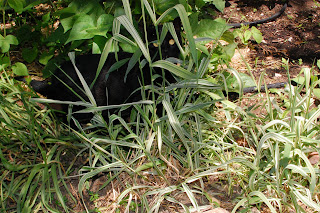 The Cherokee Purple tomatoes are big already- I think they're going to be huge! 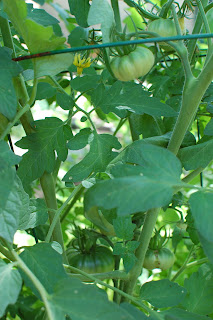 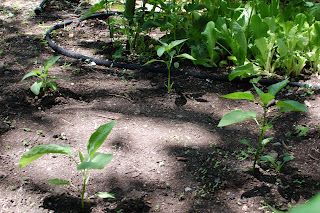 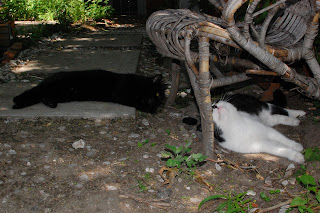 Next up- the roof garden, featuring a tomato forest!
Posted by CallieK at 12:34 PM 2 comments: 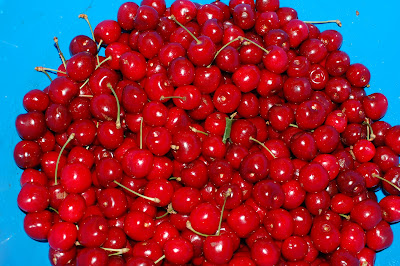 June CanJam assigned by Dana and Joel @ WellPreserved.ca was _erries, which left room for quite a few options but availability is still an issue. The obvious June choice here in Ontario is strawberries but I'm not a fan of preserved strawberries in any form other than frozen -I prefer to eat myself sick on them while they're fresh! Blueberries, and my personal favourite raspberries are still a few weeks off. I picked some local white mulberries as a possibility ( more on them in another post) but with luck and weather in our favour, local sweet cherries ripened 3 weeks earlier than expected!

Not Far From The Tree, the fruit picking organization I work with is currently expanding again and the early cherries caught us off guard- it took a few days to get the team rolling and Colette and I were running out of time to make the CanJam deadline. I decided not to wait for a sanctioned pick and went on a renegade pick. There's a wonderful cherry tree right on the main city street I live on, which always goes unpicked. I've walked past it for the last few years, dismayed at the sight of all those delectable cherries getting smushed into the sidewalk. After acquiring the homeowner's permission I dragged over my step ladder and a hoe ( for grabbing just out of reach branches) and started picking away! A neighbour came out to see what I was doing and decided to join in the fun- she grabbed a straight ladder and with me footing it ( always use safe ladder techniques for picking, kids!) scrambled up on the porch roof where she could gain access to the higher branches. The sight of two grown women hanging out of a tree was like a beacon- all kinds of people stopped to watch us and a few more joined in. A lovely older woman ( she confessed to being 70 when she was halfway up the ladder) gave us advice she had learned from picking cherries back in her home country of Italy. When we had finished picking everything in reach we all walked away loaded with more cherries than we could carry- mine weighed in at 40 lbs! 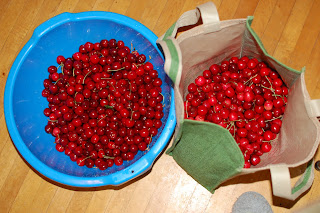 Two days later Not Far from the Tree held the first picks of the season- I joined one and took home another 5 lbs as my share - we picked well over a 100lbs on just two trees! Looks like a record breaking year!


With that many cherries Colette and I decided to use them in a couple different recipes. The first approach was just a basic cherry preserve, recipe from the current canning bible, Well Preserved, 3rd edition by May Anne Dragon. 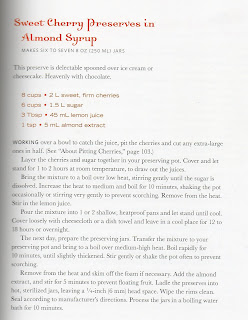 Delicious but time consuming - having to cook the cherries once, leave overnight then reheat the next day is too many steps for me. Not to mention I was running out of room- there were cherries everywhere and my kitchen was a disaster! 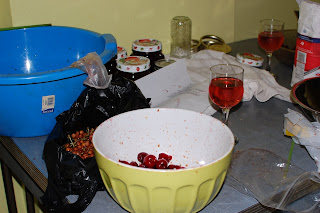 I've never attempted to pickle with alcohol before but after seeing a recipe for cherries preserved in brandy, this seemed like the perfect opportunity. All of the recipes we found called for pitted cherries and it's a fair bit of work! We developed a pretty good system using a chopstick and a gloved hand ( unless you like purple stained hands.) It's a bit messy and I suggest wearing old clothes and spreading newspaper or plastic around to catch the stray juice. Of course Colette and I were also consuming wine along with the cherries and I suspect the cherries weren't the only thing that were pickled in alcohol! 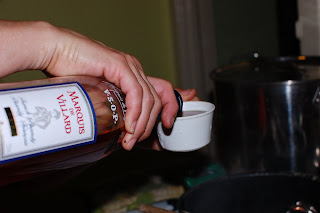 1. Pit cherries and set aside. 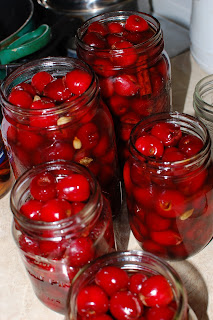 2. In a medium saucepan bring sugar water, lemon juice, and spices
to a boil. Reduce heat to maintain a simmer and cook until slightly
reduced and thickened, about 10 minutes.

3. Turn off heat. Stir in brandy and cherries.

5. Process in boiling water for 10 minutes, let cool, and store
in a cool, dark place (such as a cupboard) 6 weeks before using. Once opened, keep chilled.

We doubled the recipe and somehow ended up with two quart , and three pint jars full, even after eating many of them straight from the pot! These are fantastically good and I can't wait to try them after they've had time to age. 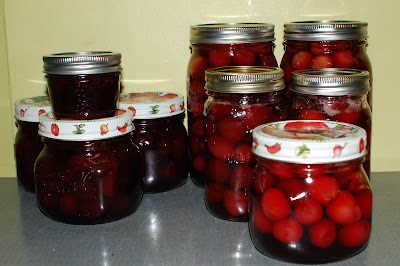