If you plant in it, it's a garden!

Over the years I have lived in many different places. Whether I had a big open yard space or barely a window ledge I've always planted things. I've basically left a trail of lilac bushes and lavender all over southern Ont. But until recent years my attempts at vegetable gardening was pretty much limited to herbs and the odd tomato plant.I can't honestly say when my need to putter around in the dirt became an obsession to grow food, but it has become one in a big way. One day I was planting a single tomato in a pot and next thing I know I'm growing nine kinds of heirloom tomatoes on the roof ( actually the neighbour's roof - I ran out of room on my deck). I've grown potatoes and edamame in plastic pails, peppers in an ancient mop bucket and my herb garden is an old enamel basin. But what I really craved was an actual in the ground garden - my last apartment had a cement front step and a backyard parking lot. I

did quite a bit of work to improve that ( see Reclaimed Earth at http://reclaimedearth.blogspot.com/) but was leery about planting anything edible in the toxic no man's land. I was working my way towards raised beds but we were unceremoniously kicked out 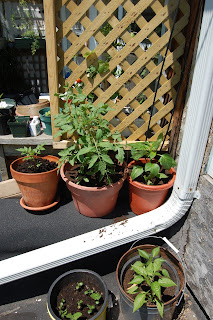 of that apartment when new landlords bought the building last fall. Just as well since they had already made me get rid of my compost under the pretext that it attracted rats! Seriously- what kind of self respecting city rat would be interested in rotting vegetables?
Posted by CallieK at 4:31 PM No comments:

When I was a child, there was one word guaranteed to ruin my day- GARDEN! As one of 13 kids a large part of my summer holidays were spent in a large garden plot several kilometers from our house where my father attempted to stretch our food budget by growing as much produce as possible. As kids we were the bulk of the labour force for planting, weeding, watering and harvesting, and we had a pretty efficient assembly line for processing the results as well. I spent many days baking in the hot sun picking beans and strawberries, only to spend the next few days blanching and slicing the results for freezing. Hands puckered and sticky from peach juice running down my arms is still a vision that gives me chills- but these days for a much different reason! Now I race from my bed straight to my garden every morning to see whether the squash are flowering and what has ripened overnight. I rejoice as each heirloom tomato emerges, I brag about my early crop of beans and I eagerly share my knowledge of pickling with anyone who will listen. And for that I owe my parents big time!
Posted by CallieK at 11:03 AM No comments: