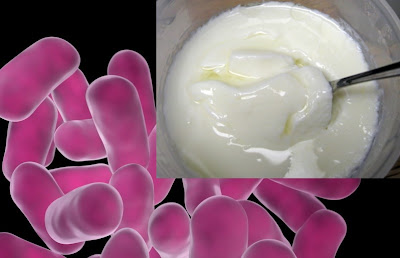 There's been a lot of discussion online recently on making your own yogurt. Making yogurt at home is not new; my mom used to make it at home when we were little, way back in the 70's. You don't need much in the way of equipment or ingredients and it's pretty simple to make and fairly forgiving if you aren't an exact recipe type person, like me. A lot of online directions include a list of must-haves and must-dos which I find intimidating and sometimes absolutely wrong. I've been making yogurt for years and don't have or do most of those things and I've never had a failed batch. What you do have to keep in mind is that all yogurt is a live culture, at least at some point and it is possible to kill the organisms by mishandling; dead bacteria don't make good yogurt.

Things you need to know when making yogurt, the basics:

You need milk. Whole milk, skim milk, goat's milk, yak's milk, powdered milk (reconstituted of course), even soy milk (I've heard but never tried- apparently you need to add extra sugar). The only type of milk you should never try this with is ultra pasteurized because it has been heated to the point of destroying the helpful enzymes and you will end up with a pot of goo.

You need a starter culture. This is just a small amount of yogurt that contains a live culture (more on this later). Since all yogurts should contain live cultures in theory, you should be able to use any unsweetened yogurt but to be safe use a good quality plain yogurt that lists active bacterial cultures as one of the top ingredients and as little extra ingredients as possible. You need about 1 tablespoon of starter per two cups of milk. Once you've successfully made a batch you can use your own as a starter for future batches.

You need to heat the milk. The milk whichever type you use, needs to be heated to prepare it to accept the culture- this breaks down the inhibiting enzymes that are present. If you are using raw milk this will also kill off any potentially harmful organisms. You do NOT need to boil the milk, only scald it. Scalding milk means to heat it until the bubbles are just beginning to form so this is the only part that requires paying close attention. You do not want to burn your milk- it smells and tastes awful and as anyone who's ever done it knows, virtually impossible to get off the pot bottom. You can heat your milk on the stove using any kind of pot with a lid- use a double boiler if you like more control over how quickly it gets hot. Remove from heat as soon as you see new bubbles appearing around the sides of the pot, put a lid on it and set it aside to cool.

You need to cool the milk before adding the starter culture. This is the point where it's possible to kill the bacteria by mistake. The types of bacteria that make yogurt are thermophiles (heat loving) but even they can't survive at temperatures over 55oC (130o F). So you must let the milk cool to lukewarm before adding the culture. Don't cook your starter! If you are unsure what lukewarm should feel like, use a thermometer and don't add the starter until the milk is below 50 C (122 F) but still above 37oC (98oF). I just use my finger and if it feels warm but not hot, I add my starter directly to the milk. Stir well with a fork to evenly distribute the culture.

You need to keep your yogurt warm for 4 - 6 hours. Once you've added the culture to the milk, the bacteria are going to do their thing which is eat all the lactose (milk sugar) and produce lactic acid among other things. Also they are going to reproduce like crazy. You want this to happen so you need to give them the ideal conditions to do so and that means maintaining a minimum temperature of 38oC (100oF) but not higher than 50 C (122 F). There are a couple of low tech possibilities to do this. If you have a gas oven, the pilot light provides enough heat to maintain the proper temps so you just place your yogurt inside and check it in a few hours. If you don't have a gas oven you can get creative. Use a heating pad set on low and cover your pot with a heavy towel. Or put a hot water bottle with your yogurt, wrap both in a towel and put in cooler or inside your microwave, replacing the bottle with another if it cools too quickly. I've stuck pots of yogurt culture on my heated waterbed (yeah I'm old school), covered them with the duvet and left them for hours. As long as the heat source produces enough to keep it in the above temperature range your yogurt will be fine.

And that's pretty much it! In 4-5 hours the milk will begin to solidify and whey will appear. Once this has occurred you can stop the process at any time by refrigerating your yogurt. Refrigerating doesn't kill the culture, it just slows it down and the bacteria don't break down any more of the sugars. The longer you leave it at a higher temp, the more sour the yogurt gets so if you like it that way, leave it up to 8 hours or overnight. Congratulations, you've made yogurt!

Commercial yogurts as noted contain at least some bacterial culture although in many cases the yogurt is treated in a way that the culture is no longer active, or there are so many additives like gelatin, preservatives and artificial sweeteners and flavours that one wonders if there's actually any yogurt left. The recent trend to promote certain brands as having unique probiotic qualities makes me want to throw things at my television. Probiotics as defined by Food and Agriculture Organization of the United Nations, and the World Health Organization are "Live microorganisms which when administered in adequate amounts confer a health benefit on the host". This includes the lactic acid bacteria used to make yogurt as well as yeasts and other microbes. That means any yogurt that contains an active bacterial culture is probiotic, along with things like sauerkraut, kimchi, miso, and fermented pickles. The bacterial cultures found in yogurt can vary a bit in terms of species but they all have similar characteristics in that they are heat loving as mentioned above, and they consume sugars and produce acid.

In my previous life I studied about these kinds of things in school and the science nerd in me still thinks bacteria is fascinating. I also believe that everyone should have a basic knowledge of the types of bacteria that are helpful, as well as the ones that can potentially harm us, at least so I'm not the only one rolling my eyes at all the ads for antibacterial products. I hope to write a series of posts over the next while that go a little more in depth into preservation methods that utilize fermentation, and the science behind it.
Posted by CallieK at 2:24 PM