March Pantry Challenge- eat what you got!

I've been encouraged to participate in a Pantry Challenge for the month of March arranged by a couple of bloggers I read: Canadian Doomer and Farmgal. They got the idea from a couple who did it for the month of February(sure, pick the short month!) at BrokeProfessionals. The idea is to try to eat entirely from what's already in your food stores, a sort of dry run for TEOTWAWKI (the end of the world as we know it), if you believe in that sort of stuff. I think it's a great idea, both from a practical and idealistic point of view. Being forced to eat only what's in the house means I might actually do something with all the fruit I preserved last year. It will also make me more aware of how often I pick up a few things here and there to supplement what's already in the house. Of course to be totally realistic we probably shouldn't have done a major grocery run yesterday. However, in our normal routine we usually do a big shop about once a month for staples and then pick up other things as we need them (root veggies and the occasional cheese from the Sorauren market on Mondays, eggs from the shop on Roncy that sells local free range, dairy and baking supplies from the natural food store and so on.). Yesterday we spent a bit more than normal but we were out of a lot of staples(butter, sugar, potatoes) and there were a few sales I wanted to take advantage of (olive oil, cheese).

I've been a bit hesitant to commit to this however because I'm not sure we can give it 100%. Not without stock piling certain things and that seems like cheating. Ms Doom decided to make a few exceptions (goat's milk for her children for one) in her plan. So the first thing on my exception list is the farmcats- there are 3 of them and while it wouldn't be impossible to stock enough food and litter for them for a month, it would require a fair amount of space and we don't really have the room. (Plus Shadow likes to rip apart bags of food for her own amusement.) The Russian has suggested that he will make homemade food for them from fish we purchased yesterday- I'll let you know how that turns out. The other thing is alcohol- while I certainly don't equate alcohol as being a necessity like milk for children, and one of us could probably stand to drink less (ahem), there's no way that one's going to stick. I'm already dreading the point when I have tell the Russian there's no more chicken for the month; I won't even consider telling him there's no more beer.

The other exceptions will be due to previous engagements/celebrations- we have concert tickets and dinner plans for Mar 11, the Russian will be on tour for a few dates this month and I'm reserving the option to do something other than cook on my birthday/St Paddy's day. Other than that we will try to eat only at home from what we have on hand. 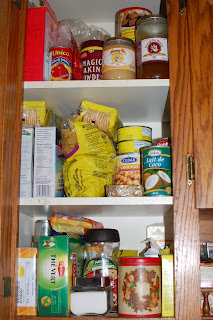 but I cleaned out the fridge and reorganized the freezer before we shopped yesterday so I have a good idea of what's here. The freezer is packed with meat and veggies, the fridge is full of mostly pickles and condiments and some dairy. The dry goods cupboard is decently occupied and the preserve shelves are pretty well stocked for this time of year. The one area of concern is fresh veggies. We have one squash, some carrots, beets and cabbage as well as 10 lbs of onions and 20 lbs of potatoes but no greens. Which of course is pretty much the norm for this time of year. I will be starting some seeds for the garden this week and will likely plants some salad greens and maybe some sprouts. The other area that is going be problematic, for me anyhow, is non alcoholic beverages. I drink a ton of sugary drinks; pop, juice, even powdered drink mix, and that's all I drink period. I know how bad it is for me, I know I'd probably drop 20 lbs if I switched to plain water but I just don't find anything else quenches my thirst. I've been trying for years to ween myself to no avail. I rationalize it for the most part because it's the only area of my diet that is high in sugar. I don't eat cookies or cake, I rarely eat candy, I don't even really like fruit! I don't know what I'll drink once I run out of the juice we bought yesterday. Probably homemade iced tea. Until I run out of lemons or sugar. And then who knows? If there's one thing that may make me cave it will be this. Suggestions welcome! 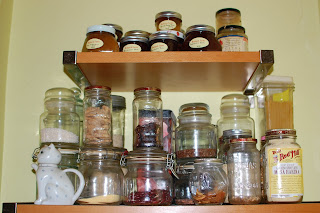 So we kick it off today! As the month progresses, I will try to post updates and maybe the occasional recipe to keep it interesting.