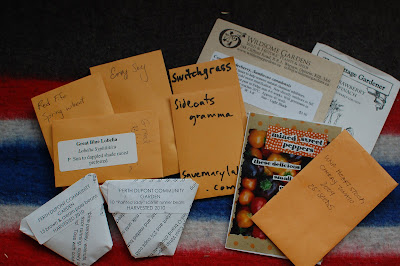 This past weekend, for the first time in years, I managed to attend Seedy Sunday! My work schedule this time of year is such that I've had to be out of town for the event for the past 6 years; last year included additional aggravation by sending me to Montreal the same weekend as Toronto's event, and not the following weekend when I could have at least attended Montreal's event instead. So I was excited to see how much the event has grown since the days when it was mainly a group of hardcore gardeners eager to swap seeds from native plants and whatever they grew themselves. Very little money changed hands at the earlier versions; some gardeners would sell extra seeds and seedlings for a nominal amount but the main currency was the seeds themselves. With the addition of so many seed vendors who sell heirloom and open pollinated seeds I wasn't sure how much if any trading was still going on, but just in case, I made up a dozen packets of seeds from some of the more uncommon and interesting stuff I've grown. I was also on the hunt for one particular item- Good King Henry (Chenopodium bonus-henricus) seeds. It's a plant that is native to Britain and was cultivated as an edible green since the Iron age although it's considered a weed by some, much like lambs quarters. You can eat the young leaves like spinach and the flowers stalks can be peeled and eaten like asparagus. A fellow blogger recently wrote about not being able to find seeds so I decided to take up the mission.

This year's event was being held at Hart House on the U of Toronto campus downtown. Thankfully it's a rather large space since attendance at Seedy Sunday gets larger every year and it was plenty crowded! As suspected the majority of booths were occupied with commercial seed companies, many of whom were new to me. And what a selection! Colette and I were like kids in a candy store, darting from booth to booth. There were also a number of local food and gardening representatives from organizations like Not Far From The Tree, FoodShare, Toronto BeeKeepers and various community gardens.


There were too many venders to make notes on all of them but a few stood out for me:

Mountain Grove Seed Co.
A family owned company from Eastern Ontario that grows and harvests all their own seeds. They grow lots of local and heritage flowers, a decent amount of heirloom veggies and a few herbs. Super friendly and knowledgeable, they were happy to answer my questions and refer me to another vendor to find Good King Henry, which they didn't carry. They don't have a web presence yet but they have a catalogue available for $2 and will mail seeds.
Mountain Grove Seed Company 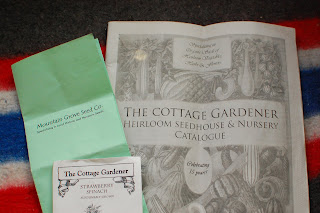 The Cottage Gardener Heirloom Seedhouse and Nursery.
This was one of the busiest booths and it's easy to see why- the variety of seeds they carry, mostly rare and endangered, is huge! Their drool worthy catalogue was available for free and while they didn't have what I was looking for, they did have seeds for a plant from the same family, one I'd never heard of. Strawberry Spinach (Chenopodium capitatum) is similar to Good King Henry in that it's leaves are edible but it also produces a strawberry shaped red fruit!
4199 Gilmore Rd
RR#1 Newtonville ON L0A 1J0
www.cottagegardener.com

As the name suggests, Jill is all about the tomatoes with a few other veggie seeds for good measure. While the variety of seeds she has available isn't huge, she wins hands down for the coolest seed package designs; I wanted to buy everything on her table just to have them all! I end up buying a package of her mixed tiny sweet peppers- the small ones seem to do really well in pots on my roof! She was also open to trade so I swapped her some tomato seeds- my Stardust yellow cherry for some Una Heartstock.
Urban Tomato
Jill Bishop
urbantomato@gmail.com


I swapped for some other interesting seeds as well- some new grasses for my thicket- switchgrass and sideoats gramma from Savemarylake.com. And from the seed exchange area I grabbed some Envy soybeans, some Red Fife wheat and Great Blue Lobelia. The best deal of the day however was from the Perth Dupont Community Garden where for a small donation, I picked up two types of pole beans, some sunchoke tubers and some chocolate which I promptly ate!

All in all, a successful Seedy Sunday!
Posted by CallieK at 4:08 PM